A stormy, soaking start to the day did not stop the Va Flaggers from forwarding the colors...or flagging Scalawags.

The Flaggers were shocked and disappointed to find Museum of the Confederacy President and CEO Waite Rawls in attendance at the Jefferson Davis Birthday Ceremony. In a quiet, but effective show of disgust, we stood and turned our backs on him as he addressed the audience, in protest of his refusal to fly a Confederate flag on the grounds of the Museum of the Confederacy at Appomattox.

When the ceremony ended, the rain was still heavy, and it was decided cooking on the grill as planned might not be the best idea, so we left to get some lunch and met back at the VMFA at 1:00. By this time, the sun was shining and the weather was BEAUTIFUL! In spite of the earlier stormy weather, over two dozen Flaggers lined the sidewalk, stretching the line from the Chapel all away around the Boulevard to the main entrance of the VMFA. We had several new Flaggers join us and were pleased with the heavy traffic and great conversations that were held. 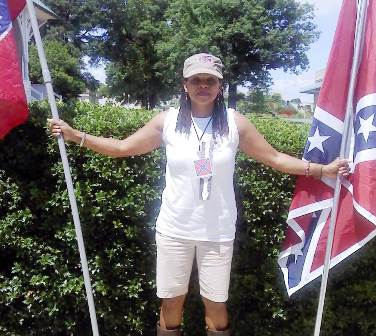 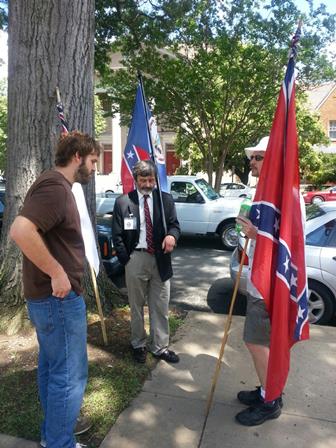 At one point, Waite Rawls was spotted heading into the UDC HQ for the Massing of the Flags, and several Flaggers took position outside the building and were able to keep him on the hot seat as he entered the building. When Mr. Rawls exited the building for a smoke break…and later to leave the event, he was again met by Flaggers, who reminded him that his refusal to fly a Confederate Flag would not be forgotten…and that we would not stand down until a Confederate flag is flying…or he is removed from the museum. 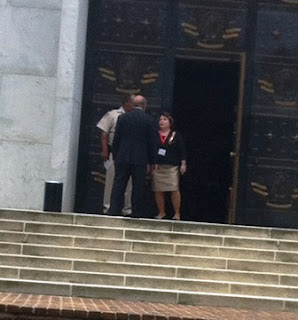 Throughout the day, we were greeted by many who had attended the days’ events, and were offered words of encouragement and support. We posed for many pictures, including the one below, when a nice lady who was leaving the Massing of the Flags asked to take a picture with our “beautiful” flags...and were thrilled when Commander Givens took time out to visit with the Flaggers. :) 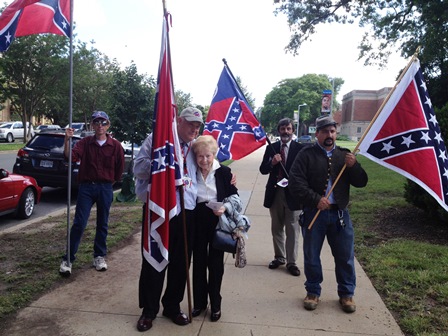 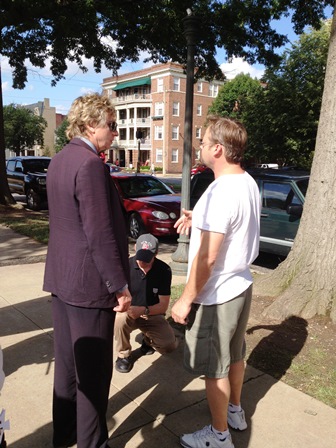 Willie Wells reported the only negative incident of the day, as his car was spit on by a young white kid on a bicycle, who threatened to do the same to Willie’s person, all at the very same moment an older lady had stopped to request a photo with him! A couple of VMFA guards came out and told the kid to move on and assured Willie that he would have been in the right to defend himself from such a disgusting, vile attack.

All in all, it was an AMAZING day in RVA… from a very soggy beginning to a beautiful afternoon with dozens of Confederate flags flying and many good conversations and opportunities to tell folks about the desecration of the Confederate Memorial Chapel at the hands of the Virginia Museum of Fine Arts…and several new recruits to the Virginia Flaggers!

Hello There. I found your blog using msn. This is an extremely well written article. I’ll make sure to bookmark it and come back to read more of your useful information. Thanks for the post. I will definitely comeback.
santa monica wedding venues