"Good evening Mayor Signer, Councilmen. My name is Susan Hathaway and I live in Sandston.

I could easily stand before you tonight and spend my three minutes talking about the honor of Robert E. Lee, or the valor and sacrifice of the Confederate soldiers who served under him, or the fact that the War Between the States was NOT fought to keep anyone enslaved, or the fact that this onslaught of PC revisionism has absolutely nothing to do with perceived "racism" or "white supremacy"...but you all know this and choose to ignore facts in favor of hysteria. 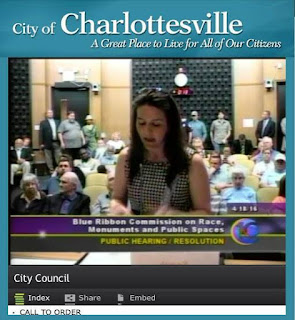 What I hope does get your attention is money...and the fact that you and the citizens of Charlottesville will need to be prepared to spend a lot of it to defend the lawsuits that will be filed if you insist on continuing with your plans to tear down or alter any Confederate memorial. Thankfully, the removal of war monuments and memorials STILL violates Virginia law, even with the Governor's veto of a bill that would have provided clarification. There is little doubt that the Va Supreme Court will affirm this in a pending lawsuit. It is good to know that our legislators have put such measures in place so that our Vietnam Veterans, several of whom are with us tonight, will not have to face having their memorials removed if/when the winds of political correctness shift against them in a town such as this one and the elected officials decide THEY are no longer worthy of respect.

I noted with great interest the comments of one of your councilmen, as reported in the local press. No doubt, in response to the overwhelming pushback against the call to dear down the memorial, it appears she is grasping for straws in attempts to rationalize your attempts to cleanse all things Confederate from the city. It is reported that this councilmen stated that Lee and Jackson were not FROM Charlottesville, suggesting that the statues are not relevant to the community. Now this is true...R.E. Lee was not FROM Charlottesville but neither are most of you who sit on city council and claim to speak for her citizens!

To claim that a community should only honor those who are "from there" is ludicrous. Certainly, Washington, Jefferson, Roosevelt, and Lincoln were not "from" South Dakota, either. Are you suggesting that Mt. Rushmore needs to be sandblasted since it has no "relevance" to that community? Charlottesville sent her sons, brothers, and fathers off to defend the Commonwealth, and those boys and men served and died under the leadership of Robert E. Lee. If you even needed "local relevance" it is there, in abundance.

It is comical, at best, when our opposition, finding no other argument with our facts or reasoning, resorts to saying we are "outsiders" and therefore we should have no say in what is happening in any other locality other than the one in which we reside. Some of you are quick to use it to dismiss us, and sadly, even some who should be standing with us have taken the bait.

The fact is that I am a 9th generation Virginian and FOUR of my Great-Great Grandfathers fought under General Robert E. Lee in the Army of Northern Virginia. My ancestors earned, and the constitution guarantees me the right to speak up and speak out against the tyrannical and illegal attempt to remove ANY Confederate memorial, and I certainly will do so when one dedicated to the memory of Robert E. Lee less than an hour from my home is under attack. The majority of the members of City Council are not even from Virginia. YOU are the "outsiders", not us.

I will close with one last suggestion. If you are determined, as it appears by the paper released regarding the creation of this commission, to remove any and all things deemed "offensive", you had best begin plans to rename this city, and secede from the Commonwealth, as "Charlottesville" and "Virginia" need to go, as well. Queen Charlotte herself was a white supremacist, owned millions of slaves, was a close friend of Marie Antoinette and clearly, as a Monarach, was an oppressor of mankind. Virginia was named after another Queen, also a slaveholder and oppressor of Irish and African alike. Sound ridiculous? It is...just like what you are trying to do here tonight.

Stop the madness. Honor all veterans. Allow all of your citizens to honor and celebrate their heritage. True diversity and inclusiveness is not achieved by destroying the history and heritage of one group of people in order to pacify another."

Facebook stats in the first 24 hours after the remarks were posted to the Virginia Flaggers' Facebook page. Comments were overwhelmingly supportive.

Congratulations to our friends in the Stephen R. Mallory SCV Camp #1315, Pensacola, FL, who raised a 15 FT X 25 FT Confederate Battle Flag on a 71' pole on the North side of I-10 near mile marker 36 over the weekend! 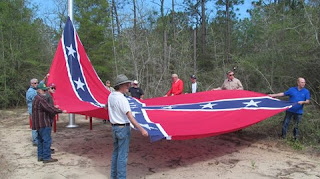 A dedication and cavalcade drive by will be held at 10am on Saturday, April 9th to commemorate Confederate History and Heritage Month in Florida. 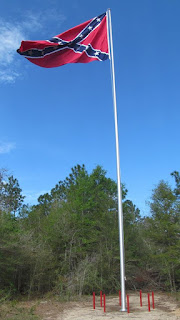 Pensacola is once again the City of Five Flags...only this one is a whole lot bigger than the one they took down! Well done, gentlemen.

"For every flag removed, a thousand more will rise to take its place..."
#DixieRising