SPIRIT OF DEFIANCE: MASSIVE CONFEDERATE BATTLE FLAG RAISED ON I-64 in CHARLOTTESVILLE, VA 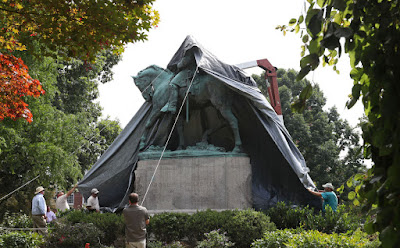 Richmond man accused of removing the illegal tarps placed over the Lee and Jackson monuments in Charlottesville convicted and sentenced to jail time.

The tarps were removed a dozen times since they were illegally placed by Charlottesville City Council, who used the death of a protestor last August as an excuse to cover the memorials after their plans to remove them were halted in court.  The final tarp removal by citizens occurred the same morning that a Charlottesville Circuit Court judge ruled  that the tarps must be removed.

For these three misdemeanor charges, Wayne was ordered to serve five months in jail. He also was ordered to pay $445, the cost of the tarp that he took down.
“I am appalled at the way people uphold justice and law here,” Wayne said in court Monday. He added that he was defending the statues as war monuments for the sake of fellow veterans.

In taking the unusual step of assigning jail time for misdemeanor charges, Judge Joseph Sirks claimed he was emphasizing the importance of following the legal process and appealing city decisions through the courts.
“We are in an age where someone takes action into their own hands and then everyone becomes a copycat,” Sirks said as he delivered his decision. “That doesn’t work in a system of the law.”

...While vandals in Durham, NC who are caught on film destroying a monument with an estimated $120,000 replacement cost...have all charges dismissed. 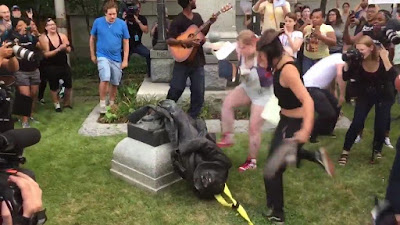 Charlottesville prosecutors did not even try to hide the fact that the prosecution and sentencing was "political" for the city, even mentioning the fact in court.  Anyone who has ever visited Lee or Jackson Parks in Charlottesville knows that both are havens for Charlottesvile's homeless population who are regularly removed for trespassing without receiving jail time.

In addition, the monuments have been desecrated numerous times in recent months, with no one ever charged for trespassing or damage caused.

Apparently, removing illegal tarps from protected war memorials is a serious threat to public safety and welfare in Charlottesville.

Mr. Wayne plans to appeal the conviction.  When asked if he had any regrets, his response was swift and certain.  "My only regret is that I didn't start snatching tarps sooner."
Posted by The Va Flaggers at 4:21 AM 10 comments: 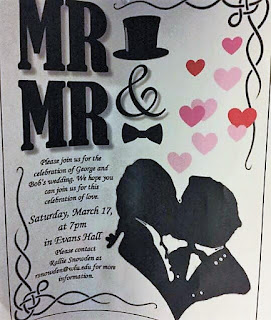 So, the same university that ripped period correct Memorial battle flags from Robert E Lee’s mausoleum in Lee Chapel to avoid "offending" anyone, is promoting THIS for the LGBT “Equality Gala” at Washington & Lee University this Saturday.

The tasteless flyer includes silhouettes of Robert E. Lee and George Washington "kissing" and can be found displayed throughout campus. Students are invited to "join in the celebration of George and Bob's wedding".

This is beyond disgraceful and an insult to the memory of both men... and is what happens when you give your institute of higher learning over to Godless liberals.

Are YOU mad enough yet?

The contact information on the flier is that of Rallie Snowden.  She is also active in anti-Confederate activism in Lexington and is a leader of the "CARE" group that fought to displace the SCV on Lee-Jackson Day.  Her W&L bio is here... https://www.wlu.edu/student-life/health-and-safety/student-health-and-counseling/university-counseling/meet-the-staff/profile?ID=x7352  She is employed as a COUNSELOR at the university. If you would like to contact the university to express your outrage and disgust that such disrespect is tolerated and supported, see contact information below: President Will Dudley