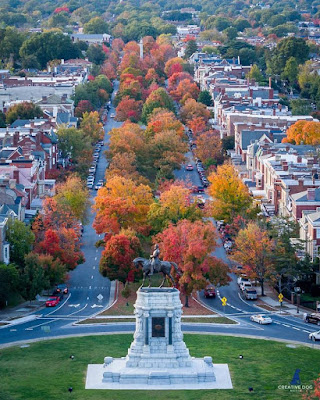 Earlier today, the city of Richmond announced the formation of a “Monument Avenue Commission” to “help the city redefine the false narrative of the Confederate statues that line Richmond’s grandest Boulevard”.  The Virginia Flaggers are extremely disappointed that Richmond’s newly elected Mayor, Levar Stoney, has chosen to make war against the Confederate monuments that line Monument Avenue in Richmond and against the thousands of descendants of Confederate Veterans that they represent and honor, diverting precious resources and taxpayer money away from the real and pressing matters facing the Capital of the Confederacy, and creating division and disharmony in our community.

Thankfully, the Commonwealth has a law that protects ALL war memorials, and also prevents them from being altered.  Following the lead of disgraced New Orleans Mayor Mitch Landrieu, Mayor Stoney has chosen to tow the PC line of the NAACP and SPLC, who have promoted the false narrative that our monuments and memorials are somehow tied to “racism, slavery, Jim Crow, and white supremacy.”  This false narrative has gained traction with the left, who has successfully used it to convince politicians to take up their cause of attempting to remove every trace of the Confederacy from public view.  Mr. Stoney appears to have caved to their pressure.

Poll after poll shows that an overwhelming majority of citizens of the Commonwealth oppose any removal or altering of War Memorials, and across Virginia, politicians who have supported such nonsense have consistently been voted out of office or lost their bid for election.

Our monuments and memorials need no new “narrative” or “context” added to them, especially one based on the PC false narrative of the NAACP and SPLC.  Their meaning is carved in stone and has absolutely nothing to do with “racism, slavery, Jim Crow, or white supremacy”, and everything to do with honoring men who answered the call of the Commonwealth to defend hearth and home from invasion.

The Virginia Flaggers stand ready to vigorously defend these monuments, and the men they represent, from any and all destruction, removal, and/or alteration, and support for our Cause gains momentum with every petty attempt like this one where a politician looks to make a name for himself and gain political points with a very small percentage of their electorate.  Mayor Stoney would do well to look to Charlottesville, where City Council voted to destroy the Robert E. Lee monument, in violation of state law, and in the process plunged the city into chaos and racial division that locals say is unlike any they have seen in decades. Of the three councilmen who voted to remove the monument, disgraced Vice-Mayor Wes Bellamy has lost his teaching position with Albermarle County and his position on the State Board of Education, Kristen Szakos has announced she will not run for re-election, and Bob Fenwick, who cast the deciding vote, recently lost his bid for his party's nomination for his council seat.

True diversity and inclusiveness is not achieved by destroying the history of one group of people, in order to appease the demands of another.

The city has set up a website to receive public comments, www.monumentavenuecommission.org. Please visit the website and leave a comment asking them to leave the monuments alone.

Look for more updates about scheduled public meetings of the commission, and more ways to support our efforts here on the ground.
Posted by The Va Flaggers at 9:52 AM 7 comments:

Posted by The Va Flaggers at 4:54 AM No comments: