UPCOMING EVENTS
Posted by The Va Flaggers at 7:17 AM No comments:


Meanwhile, a HUGE win in Alabama, where the Alabama Supreme court REVERSED a lower court ruling on the Confederate monument in Linn Park in Birmingham, and UPHELD Alabama's historic monument protection law!

The Alabama Supreme Court today ruled that the city of Birmingham violated Alabama’s monument protection law when it placed a plywood screen around a Confederate monument in Linn Park in August 2017.
In a 9-0 decision, the justices reversed a lower court ruling in favor of the city. The Supreme Court sent the case back to circuit court with instructions to enter an order that the city broke the law and must pay a $25,000 fine.
The Legislature passed the Alabama Memorial Preservation Act in 2017 in response to removals and calls for removal of Confederate monuments on public property.
The law prohibits local governments from moving, altering, renaming, or otherwise disturbing monuments that have been in place 40 years or more.
The stone base of the Confederate Soldiers and Sailors Monument has been in Linn Park since 1894. The marble shaft was added in 1905, when the Pelham Chapter of the United Daughters of the Confederacy dedicated the monument.
Former Birmingham Mayor William Bell ordered the covering of the monument. Bell took that step after a city councilman asked that the monument be removed.
Attorney General Steve Marshall filed a lawsuit asking the court to declare the covering of the monument violated the Memorial Preservation Act.
In January, Jefferson County Circuit Judge Michael Graffeo ruled that the law violated the city’s rights to free speech and due process.
“Just as the state could not force any particular citizen to post a pro-Confederacy sign in his or her front lawn, so too can the state not commandeer the city’s property for the state’s preferred message,” Graffeo wrote.
In a 44-page opinion today, Justice Tommy Bryan cited legal precedents and concluded that the circuit court erred in ruling that the city had constitutional rights to free speech and due process.
The ruling also addressed the amount of the fine. The law calls for a $25,000 for each violation of the act. Bryan concluded that the city was subject to a single $25,000 fine, rather than a fine for each day the monument was covered.

While we realize the fight is only beginning, let's take a moment to pause and thank God for these victories.  Every win helps our momentum, encourages our supporters, and reminds those who would have every trace of our history and heritage removed that there are still plenty of us with PLENTY of fight left.

God bless all those who continue to fight the good fight, and God save the South!

Giving Thanks in the Tradition of Jefferson Davis


The Virginia Flaggers invite all of our friends and supporters to join us as we pause to give thanks to Almighty God for our bountiful blessings and continued shield of protection against our foes. We wish you and yours a blessed and very Happy Thanksgiving and encourage you all to follow the example set by President Jefferson Davis:
"...Now, therefore, I, Jefferson Davis, President of the Confederate States, do issue this, my proclamation, setting apart Thursday, the 18th day of September inst., as a day of prayer and thanksgiving to Almighty God for the great mercies vouchsafed to our people, and more especially for the triumph of our arms at Richmond and Manassas;
and I do hereby invite the people of the Confederate States to meet on that day at their respective places of public worship, and to unite in rendering thanks and praise to God for these great mercies, and to implore Him to conduct our country safely through the perils which surround us, to the final attainment of the blessings of peace and security. Given under my hand and the seal of the Confederate States, at Richmond, this fourth day of September, A.D. 1862"
Posted by The Va Flaggers at 6:45 AM No comments:

Just another example of the very real and stark difference between us and them.
The flag will be back up and flying soon, and no doubt once word spreads, we will get even more offers of land for more flag sites. Criminal activity like this is meant to intimidate, but only serves to strengthen our resolve. We survived four years of illegal invasion and 150+ years of reconstruction. This. Ain’t. Nothing.
To assist with this and our other Interstate Battle Flags and ongoing Heritage Defense projects, please make checks payable to
“The Virginia Flaggers” and mail to:
P.O. Box 393, Sutherland VA 23885
Or donate here:
www.vaflaggers.com/i95flagdonate.html.
Posted by The Va Flaggers at 5:00 AM No comments:

As Virginia Democrats Vow to Destroy War Memorials, The Va Flaggers Prepare to Fight Back

For every flag or monument removed, a thousand more will rise to take its place.


Posted by The Va Flaggers at 4:28 AM No comments:

Posted by The Va Flaggers at 10:24 AM No comments: 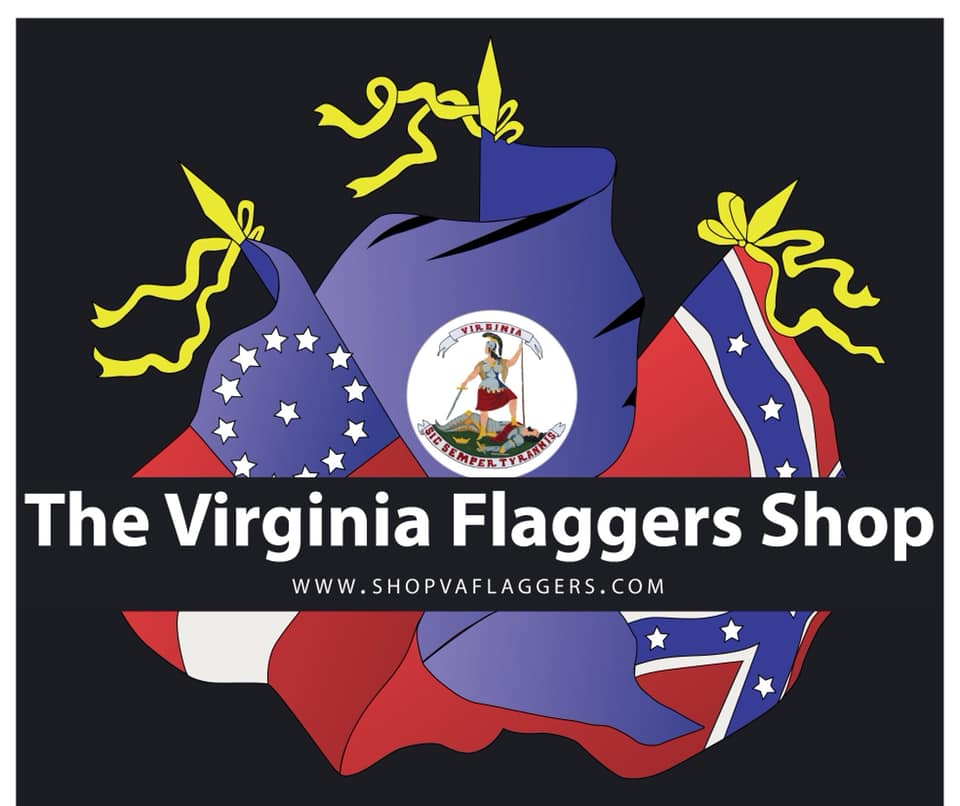 THANK YOU AGAIN for your support.  Take a look at the updated site, and remember that every purchase helps to fund our projects.

Posted by The Va Flaggers at 7:09 AM No comments: