On Saturday, June 8th, the Va Flaggers attended the Nineteenth Annual National Jefferson F. Davis Memorial Service at Hollywood Cemetery in Richmond, VA. In spite of HEAVY downpours throughout the ceremony, a crowd of over 200 gathered in memory and honor of our President.

We handed out over 150 stick flags, and suggested that recipients leave them on the grave of a Confederate soldier before they left for the day. Several dozen Flaggers were on hand for the event, serving in many different capacities and, of course, forwarding the colors. 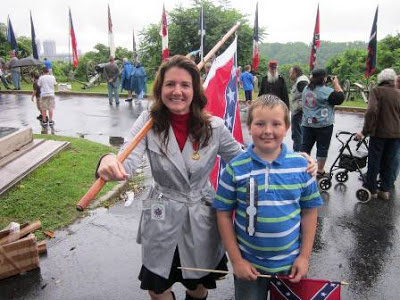 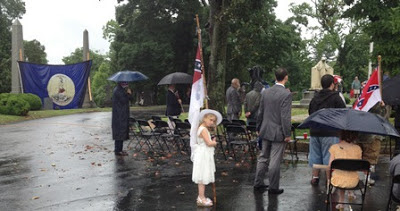 The President General of the United Daughters of the Confederacy and the Commander In Chief of the Sons of Confederate Veterans were on hand to bring greetings, and I was grateful for the opportunity to address the attendees on behalf of the Va Flaggers.

At the close of the ceremony, I was deeply honored and very pleased to be presented with a flag that flew proudly over the grave sites of many Confederate Officers and soldiers during the year at the cemetery.  I wish to express my sincere thanks to Everette Ellis and the Jefferson F. Davis Memorial Committee for this wonderful gift.

Many thanks to Commander Ellis and the Jefferson Davis Committee,   Jim Cochrane and the J.E.B. Stuart Camp#1343, SCV and Knibbâ's Battery, and all those who made this ceremony a memorable one. 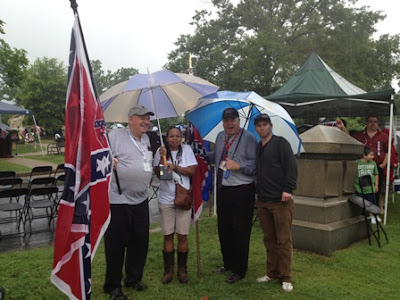 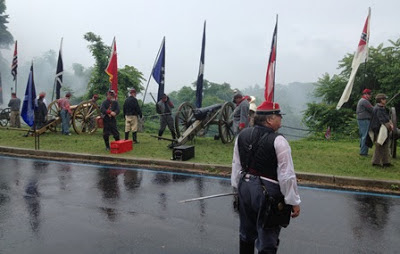 God bless Jefferson Davis and God save the South!