...sent to Alex Nyerges, Director of the Virginia Museum of Fine Arts (VMFA), in response to a Call To Action from the Va Flaggers earlier this week:


“When… there arose in the Northern States an antislavery agitation, it was a harmless and scarcely noticed movement until political demagogues seized upon it as a means to acquire power. Had it been left to pseudo-philanthropists and fanatics, most zealous where least informed, it never could have shaken the foundations of the Union and have incited one section to carry fire and sword into the other … the agitation was political in its character, and was clearly developed as early as 1803…”   ~Jefferson Davis, President, Confederate States of America

With all due respect, sir, what most p.c. “political demagogues” need is a little forbearance and education. While assuming a mantle of tolerance, many today become radically INtolerant of Confederate history. You may already know that the U.S. flag flies over the final resting place of many American veterans all across Europe. Of course, WE won that war too, so how could our “allies” refuse to honor our valiant dead?

Sir, I somewhat understand the pressure on funding that can be applied through governmental channels. But, “It’s a soldiers’ flag.” Is it not time to “do the right thing?” Please return the soldiers’ flag to the Confederate Memorial Chapel."


Thank you, Mr. Perry for your eloquent and well written letter. We appreciate your support and that of so many others who have called, written, or emailed the VMFA during this campaign. PLEASE help us by continuing the efforts, which provide much needed support those who are boots on the ground in this battle.

Wednesday, June 12th found the Virginia Flaggers back on the sidewalk at the VMFA, forwarding the colors and protesting the forced removal of Confederate Battle Flags from the Confederate Memorial Chapel. 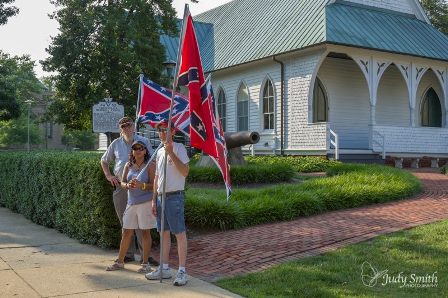 Our next flagging is THIS SATURDAY, June 15th, Noon - 4:00 p.m. PLEASE JOIN US and speak for those who no longer have a voice!

If you cannot attend, please help us by taking a few minutes to contact the VMFA and ask them to return the Confederate Battle Flags to the portico of the Confederate Memorial Chapel. This week, we are asking you to contact Stephen Bonadies, by email at stephen.bonadies@vmfa.museum, or by phone at (804) 340-1400.

TOGETHER, we will RETURN the flags and RESTORE the honor! 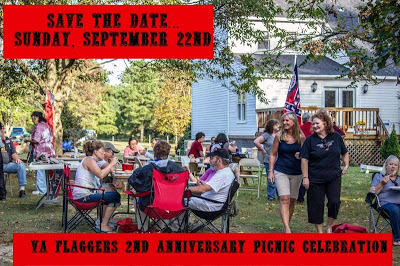