Come celebrate the birthday of President Jefferson Davis at  Hollywood Cemetery in Richmond THIS Saturday and then join us afterwards on the sidewalk in front of the Virginia Museum of Fine Arts and take a stand for our Confederate Veterans and the flags they fought and died under! 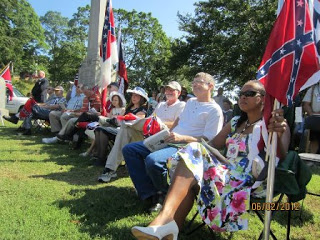 "Join the Virginia Division Sons Of Confederate Veterans at Davis Circle in Hollywood Cemetery, Richmond, Virginia, for the Presidents annual celebration. Bag Pipe band, Honor Guards, Rifle and Cannon salutes. Free ice water, folding chairs and port-a-jons, for your convenience. Souvenir programs and ribbons. Ceremonial flags available. Keynote speaker is Bert Hayes-Davis, great great grandson of Jeff Davis. Free and open to the public, come on out, present a wreath for your organization, hope to see you there." 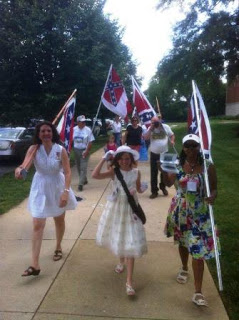 Immediately following the Jefferson Davis Birthday Memorial Service, the Virginia Flaggers will host a MASS FLAGGING of the Virginia Museum of Fine Arts. Last year, we had over 100 folks on the sidewalk, forwarding the colors, protesting the VMFA and their forced removal of Confederate Battle Flags from the Confederate Memorial Chapel, and educating the public about our Confederate ancestors and the flags the fought and died under.

We invite ALL to attend, and continue the celebration of President Davis' birthday by gathering on the Boulevard. We will provide hot dogs and drinks, and there will be plenty of veteran Flaggers to show you the ropes! 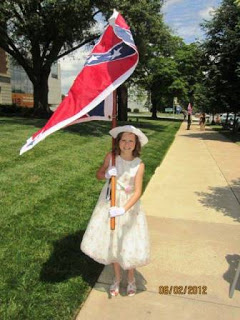 The ceremony at Hollywood Cemetery begins at 9:00 a.m. We will be on the Boulevard from 11-4. Come when you can, and stay as long as you can, JUST COME!

Twenty years after Gen. Robert E. Lee rode into Appomattox and surrendered his tattered army, ending the War Between the States, a memorial chapel was built in Richmond in memory of the 260,000 Confederate soldiers who died during the conflict. The Pelham Chapel – Confederate War Memorial is designated a National Historic Landmark by the U.S., and has been granted the status of Confederate Monument by the Commonwealth of Virginia.

The organ in the chapel was donated by a group of Union veterans from Lynn, Mass. One of the contributors to the soldiers' home that surrounded the chapel was Gen. Ulysses S. Grant. And a Union private from Massachusetts donated his annual pension to support the home.

Confederate flags had flown over the grounds since the opening of the Old Soldiers Home in 1885. Those flags did not trouble the Union soldiers who donated the organ to the chapel; nor did they trouble Ulysses S. Grant. They were placed there by Confederate Veterans, to memorialize the Confederate dead, and honor the living.

Fast forward 150 years…on the eve of the Sesquicentennial Commemoration of the War Between the States, June 1st, 2010, Confederate Battle Flags were forcibly removed from the Confederate War Memorial by a restriction in the lease renewal, at the insistence of the Virginia Museum of Fine Arts.

This is in direct violation of Virginia law, which clearly states: “it shall be unlawful for the authorities of the locality, or any other person or persons, to disturb or interfere with any monuments or memorials so erected, or to prevent its citizens from taking proper measures and exercising proper means for the protection, preservation and care of same. For purposes of this section, "disturb or interfere with" includes removal of, damaging or defacing monuments or memorials, or, in the case of the War Between the States, the placement of Union markings or monuments on previously designated Confederate memorials or the placement of Confederate markings or monuments on previously designated Union memorials.” (§ 15.2-1812)

As citizens of Virginia and descendants of Confederate soldiers who gallantly answered Virginia’s call to defend her, we demand that the VMFA remove these blatantly prejudicial restrictions and allow the Confederate Battle Flags to once again fly on the Confederate War Memorial.
Posted by Connie at 5:19 PM