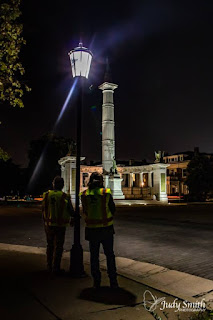 PRIVATE SECURITY HIRED FOR MONUMENTS IN CHARLOTTESVILLE AND RICHMOND THIS WEEKEND.

Earlier this week, we announced that we had contracted with private security to help protect the Lee & Jackson monuments in Charlottesville this weekend and asked for sponsors to help cover the costs.

The Neo-Marxists who were behind the riot and monument destruction at UNC have been linked to the monument destruction in Durham, and Antifa-led riots in Charlottesville. Their goal is to use their “success” in North Carolina to encourage and teach others to do the same across the South.

We have no confidence in a City Council who made its disregard for the laws of the Commonwealth and its disrespect for our history and heritage perfectly clear when they voted to violate state law and attempt to remove the monuments. City Council members are on record as supporting those who organized the riots, violence, and destruction in North Carolina, and would no doubt welcome and encourage the same in Charlottesville.

We are not going to sit by and let that happen.

The response to our request was overwhelming. When we realized that this week was also move in for VCU in Richmond, and that there were many events planned by local radicals for the August 30 anniversary of Gabriel's Prosser's failed Rebellion, on top of the increased vandalism in the days since the violence at UNC that led to the destruction of the student memorial there, we decided to hire security for the Richmond monuments, as well.

It will also give our Monument Guards in Richmond a break this weekend, some of whom have been out overnight continuously for the past two weeks.

The private companies will supply experienced security guards to patrol the Lee & Jackson monuments in Charlottesville, and the dozen or so monuments we protect in Richmond. We have coordinated our plans with local law enforcement in both cities, and our Monument Guards will work in tandem with them in both locations.

Thanks for the support. It kinda breaks my heart that people have to be paid to do it.

Thank you. Praying every Southern city/town/state will do the same. What a shame that our "gov't" now sponsors lawlessness. It appears that more and more we will have to stand up for the rule of law and for order, ourselves