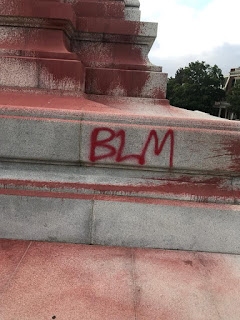 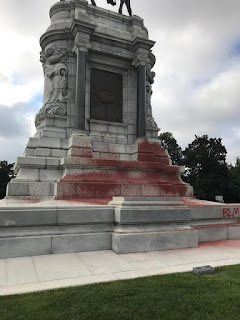 At approximately 7:45 a.m. this morning, one of our monument guards discovered vandalism at the Robert E. Lee monument on Monument Avenue in Richmond.  Capitol Police were notified and have arrived at the scene. 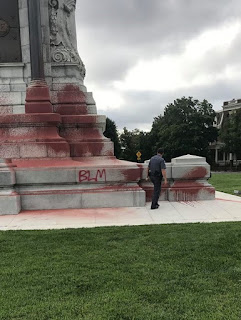 We have checked all the other monuments on Monument Avenue and in Hollywood Cemetery and they are all clear.Captiol Police are telling our folks on the scene that it appears the crime was committed some time around 6:00 a.m., based on their patrol schedule.  The Lee monument is owned by the Commonwealth Virginia and is under the jurisdiction of State Capitol Police.  Please call (804)786-2568 and urge them to have the monument cleaned immediately and launch an investigation to catch and prosecute the vandals.We have Richmond Mayor Levar Stoney to thank for fueling the fires of hate and discord in the Capital of the Confederacy and encouraging this kind of  violent desecration of our memorials by repeating the left's false narratives and lies.  His rigged monument commission wasted taxpayer money and city resources to promote his monument removal agenda, knowing full well that Virginia State law and Richmond's own charter prevent them from being removed or altered.

We are on the scene in Richmond and will bring you more info as we have it available.