September marks the second anniversary of the Virginia Flaggers, and we enter our 24th month of Flagging the VMFA with new, nationwide attention focused on the forced removal of Confederate Battle Flags from the Confederate Memorial Chapel in Richmond,  The news of the I-95 Battle Flag Project, and the media frenzy that has ensued has meant that MANY MANY people are hearing about the desecration of the Chapel for the first time!

It has also meant new recruits on the Boulevard, and we welcome the chance to join with more and more folks who have decided to take a stand in the face of the growing attacks against our heritage.

Saturday, August 31st was a warm day, but still found 12 Flaggers on the Boulevard, forwarding the colors and standing in protest of the VMFA.  Foot traffic was reported a bit slow, but plenty of flags were flying in the breeze to replace those removed from the Chapel.  A supporter from Chesapeake stopped by to bring a donation for the I-95 Battle Flag Projects, and offer his support for  our efforts.

Another warm afternoon greeted Va Flaggers on Thursday, September 5th, where a half dozen Flaggers held the line in front of the VMFA.  Temps reached 94 degrees, and winds were low, but the Flaggers stood strong and helped educate both Richmond residents and visitors about our Confederate Veterans and the flags they fought and died beneath.

The weather cooled off a bit for Flagging on Saturday, September 7th.  Once again, a dozen Flaggers gathered, and this time conversations were plentiful, including a woman and her son who were visiting from Missouri.  As is the case with most folks we talk with, they were very supportive of our efforts. 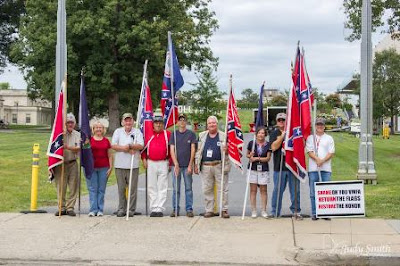 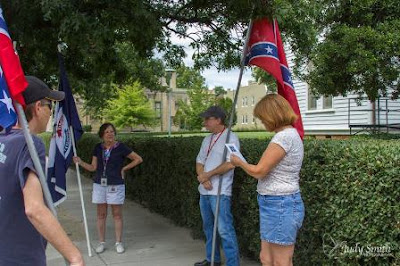 April 19, 2014:  Susan will be traveling to Quincy, FL to speak at the Confederate Memorial Day Service at the Soldier's Cemetery, sponsored by the Finley's Brigade, SCV.
Posted by Connie at 2:17 AM