A Flag By Any Other Name...

There has been some discussion/speculation about the unusual lay out of the stars on the RVA I-95 Battle Flag. The flag, made especially for the RVA site, and special ordered weeks ago, is a replica of an Army of Northern Virginia, 3rd bunting issue battle flag. More info here... http://www.confederate-flags.org/army%20of%20northern%20virginia-2.html 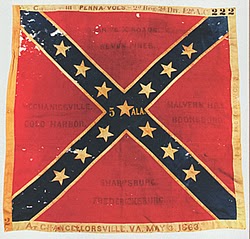 "Let me tell you why the ANV Battle Flag is Historically Accurate and what it means to me and my family now living in South Carolina.

In 1647 the seed to my Ancestral Links was Col. William Kendall who was not in the first ship that landed at York Town, Va. , but he was definitely in the second or third ship and after a short stay at York Town moved to Colonial Williamsburg where he became the First Chairman of the Virginia House of Burgess. Here he lived and raised a family. He and his sons and there sons and daughters carved the Colony of Virginia out of the Wilderness. They fought the Indians and the British under George Washington. The family continued to grow and migrated further into Virginia and the Land known as the "Old Dominion" .

Their sons fought the British again with Richard Lee to defend Washington, DC during the war of 1812. The family grew a d migrated again into what was to become North Carolina, Maryland and Pennsylvania. When the Tyrant Lincoln chose to send armed troops into the waters of Charleston, SC and ignored the Constitution by Suspending the Writ of Habias Corpus , implementing Martiall Law, and Nullified the Fist and Second Amendments, the Grandsons of the Virginians revolted and fought with Robert E. Lee. The family had spread throughout the South , to the Carolinas , Georgia, Florida, Tennessee, Alabama, Louisiana, Mississippi, and Arkansas. When the Union invaded Virginia and sent troops to attack Richmond , the Capital of the New Confederacy, her President Jefferson Davis called for troops from every state in the Confederacy. The combined troops under General Beauregard were formed into the Army of Northern Virginia . A new flag was needed for the Battlefield for these soldiers as the First National Flag of the Confederacy looked to much like the Union Flag from a distance . Therefore General Beauregard ordered a new flag that was so brilliant that it stood out and was easily recognized and No one would have any trouble in knowing what soldiers were under this flag.

The flag had to be designed to be resistive to weather conditions so the flag was reduced to a square 4 ft X 4 ft flag with an Inch and a half Border known as Bunting. The flag also bore the cross of St Andrew the Patron Saint of Scotland for reason of his known defiance and stand against Tyranny. The Thirteen stars were added , one for each of the Thirteen States or Territories of the Confederacy. This Flag was to be known as the Soldiers Battle Flag of the Army of Northern Virginia and it represented further the unity of the Confederate States which had all sent their sons to Virginia to defend the Honor of their families unified under this most unique and distinctive Flag.

My family had members from each of those states fighting under this square ANV Battle Flag and many of them died on Virginia Soil to defend it. My ancestors from every Southern State shed their blood into the soil of VIRGINIA. We shall never forget them nor shall we forsake their sacred memory .

FOR ONCE WE WERE ALL VIRGINIANS . Thanks be to God."

Thank you, Sandy. We wholeheartedly agree.  Although we would believe that ALL Confederate flags are honorable and worthy of display, we thought it appropriate that our first project, in the heart of the Commonwealth, should showcase the flag of the ANV.   LEST WE FORGET!

Susan Hathaway
Va Flaggers
Posted by The Va Flaggers at 5:24 AM