Our Time is NOW!

Practically since the moment the Va Flaggers hit the sidewalk two years ago, our efforts, and many of us personally, have been the subject of numerous attacks from a group of bloggers/amateur historians who are apparently twisted up in knots over the fact that there are folks who are willing to push back against their Anti-Confederate agenda. For some time, they have had control over the message and how the WBTS was “interpreted”…i.e…”It was all about slavery, Confederates are traitors, all Southerners are racists, etc…” Their smear campaign against us has been entirely unsuccessful, as our movement has grown by leaps and bounds, and Southerners all across the U.S. are standing up and shouting “NO MAS” to the lies and distortions directed at our ancestors.

Recently, the news of the I-95 Battle Flag project has ratcheted up the attacks. Numerous blog posts were made claiming everything from laws being broken at the flag site to dead bodies being disturbed by the installation of the flag pole. There have been many false reports to our local media, attempting (unsuccessfully) to have them chase wild leads and discredit us. One media outlet actually took the bait on one of these “tips” , and reported that the flag was “being assembled” last week. This was, of course, news to us, since it hasn’t arrived yet, and as far as we know, comes “no assembly required.” The (completely unsubstantiated) report that aired gave new meaning to the phrase “don’t believe everything you read and hear in the press.”

A few days ago, a blogger posted a photo of a group posing with our banner before the Heritage Rally parade in Richmond in January of 2012. In the photo, standing with the Flaggers is a young man that they label a “white supremacist” and each of the heretofore mentioned bloggers have submitted posts attempting to link him and his activities outside of that parade, with us.

Of course, any claims that our group has any connection to anything other than heritage defense are completely false, and part of what is clearly a desperate attempt to create a controversy where none exists, in order to thwart our efforts. A comment from the source who “leaked” the so-called “connection” is very telling:

"Well, they should be scared of us, we win at this game, always have and always will.
We would like to help put a stop to this flag going up, but we need a little assistance."


Apparently, the assistance to "put a stop to this flag going up" he sought and received was in the form of folks scanning the internet for hours trying to find SOMETHING… ANYTHING… to attempt to smear us and damage our credibility. After two years, and HUNDREDS of flaggings, the best they could come up with was a single photo of a group of people who gathered to march in a parade, some 18 months ago.

Many people, having watched this obscene drama unfold on these blogs, have asked us if we know what drives these folks to the point of obsession. We contend that those of us who were raised in the honorable and principled tradition of our noble ancestors could never fathom to understand the hate and animosity that motivates this kind of behavior.

One of the most offensive claims is that the Va Flaggers have ever participated in or somehow condoned the flagging of a place of worship and/or Civil Rights Memorial.  This is utter and complete nonsense and nothing that we have ever done, nor will we ever consider doing so in the future.  PERIOD.

The Virginia Flaggers have not changed our message since September 5, 2011. Everything we do is to honor the memory of the Confederate soldier, and to stand against those who would desecrate our memorials and dishonor our veterans. Unlike these Floggers, there is no part of what we do that is related in any way to any kind of hate or intolerance. It has always puzzled us that those who shout “intolerance” the loudest, are typically the most intolerant among us, and that is particularly true in this case.

The positive side to all of this media attention, a large part of which we (ironically) owe to the constant attention from these bloggers, is that we have been overwhelmed by the outpouring of support that we have received. It seems that there are MANY, MANY people, both north and south of the Mason-Dixon line who are fed up with the PC attempts to completely eliminate our flags and monuments, and with them the memory of the Confederate soldier, from the public venue.  We are thrilled at the number of Compatriots “rallying around the flag", and offering support for the project, often in memory and honor of their Confederate ancestor, like this one, recently received:

We have been challenged to “answer” each and every outrageous claim made by these bloggers. We submit that we will not be seduced into abandoning our true mission to waste time defending our organization against false claims and innuendo. We are committed to the cause of defending our ancestors and challenge anyone who questions our credibility or motivation to come out and meet our Flaggers, who are on the Boulevard in Richmond twice a week, EVERY WEEK, as we have been since October 1, 2011, and will remain until the Battle Flags are returned to the Confederate Memorial Chapel.  Stay for a spell, and listen as we change hearts and minds in Richmond, and educate citizens and visitors about the honor and valor of the Confederate soldier and the flags under which he fought and died. 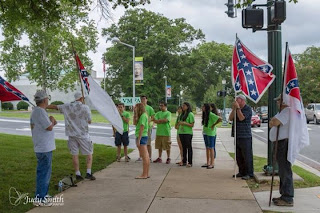 We are steadfast in our determination, and sincerely grateful for the continued support from so many across the Confederation. 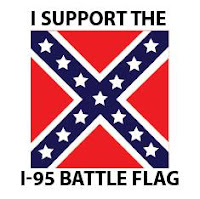 They are scared. They know they can't stop this and they will pull out whatever ugly smear they can fabricate.
In the next few weeks you may even see a few lame attempts as "compromises" (a term Leftists only use on the defensive when they need to recharge their attack machine).

Keep up the good job everyone, and know that you have the rest of us cheering y'all on.

The comment "Well, they should be scared of us, we win at this game"
Says it all, to them it is simply a "Game", while we look at it as an important remembrance of our ancestors!