Last week was a big one for us in many ways. We have already reported on the great turnout and successful fund raising at our picnic on Sunday, but it turns out that there are more far reaching effects than can be measured by head counts and calculator totals, and we wanted to share a couple of things with our friends and supporters.

On Saturday, the day before the picnic, we held our regularly scheduled flagging of the Virginia Museum of Fine Arts.  On October 1st, we will mark FIVE years of (twice weekly) protests on the sidewalk on the Boulevard, and since we had friends and supporters coming in from out of town, we had a pretty good crowd, with over a dozen flaggers out forwarding the colors, lining the sidewalk in front of the VMFA. 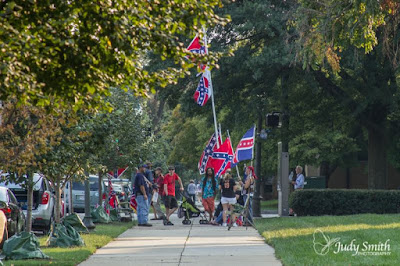 There was a lot of traffic out that afternoon, and we had a very special visitor.  Corporal Charles Bacon (AKA “Crosby”, a pet pig, joined the Flaggers and was an instant hit.  Adults and children were drawn to us and our little four legged ambassador served to open the door to MANY more conversations than we typically experience. 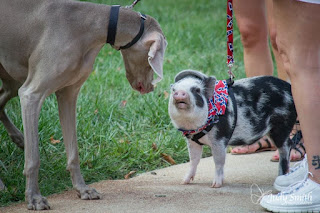 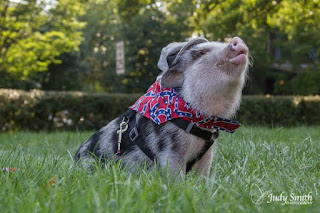 One Flagger filed this report:

“Barry and I talked to a few people and I'm just amazed of just how uneducated some people...especially the college kids are. We talked to these two and the one said she was surprised how nice we were. She made the comment that we didn't seem to be the "norm" when it came to those who carried the flag. We let them know that we ARE the "norm "and that we're not hateful or racist people. We explained that the vast majority of us are just honoring our heritage and that we're tired of the attacks on our heritage, monuments etc…” 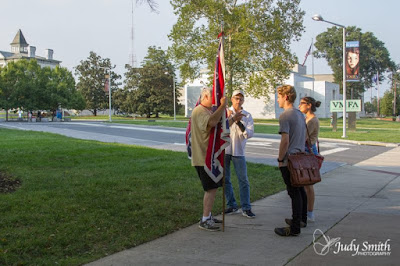 It was a FANTASTIC afternoon on the Boulevard with many, many good conversations, and opportunities to advance the flags of Dixie, and educate folks about our history, our veterans, and the flags under which they fought and died.  It would be enough if that were the end of the story, but there’s more…it gets even better… 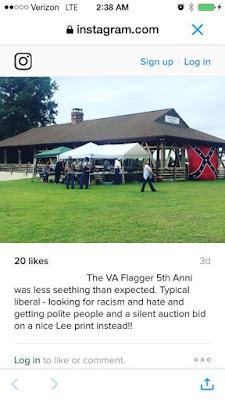 Looks like a couple of guys saw our Flaggers on the sidewalk at the VMFA and decided to come to the picnic Sunday.  On social media, they talk about wanting to take photos and do interviews, looking to expose the hate and “racism” within our group.  Our greeter remembers them well and took extra time to welcome them and share literature and information since they appeared to be visiting.

In the end, they found NOTHING to report.  Several hours with over 300 Confederate Heritage Supporters, and NOT ONE trace of anything objectionable to report.  All they found was nice folks and some cool auction items.  Oh yeah...and “less seething than expected”.  :)

When asked what he expected to find, his friend reports “I expected a crowd just  out for something to do on a Sunday afternoon.  The allegations of extreme racism weren’t validated.”

They came searching for hate…and left with TRUTH.  How cool is that?

Have I mentioned how proud I am to be a Va Flagger?
#winning

Something worth pointing out to the uneducated (especially college students and any budding historians) is that News, by definition, is NOT the norm. What makes the News newsworthy is that News is all about the unusual... those things that are different from everyday life. And that’s been the Rule of News here in the U.S. for well over two centuries.

Over the last week millions of elderly folks went shopping without incident. Millions of parents did NOT beat their kids to death. Millions of young folks didn’t shoot anybody. There were millions and millions of uneventful Police-Citizen interactions. And as a rule, Historians are notoriously bad at grasping the basic implications of the Rule of News.

What’s interesting now is that the Virginia Flaggers are becoming more newsworthy because they haven’t been newsworthy... no violence, none of the hate mongering or any of that stuff. The anti-Confederate PC Media witch hunt dominated news reporting for so long that it created an illusion of what was “normal”.

So now the Virginia Flaggers doing what they’ve always done looks new and unexpected to folks.

I love the potbellied piggy!