CALL TO ACTION: Alexandria City Council to Consider Future of Our Confederate Memorials

As we reported earlier, Alexandria's Ad Hoc Advisory Group on Confederate Memorials and Street Names has issued its final report to City Council.  You can find the details here:  https://www.alexandriava.gov/Confederate


Summary of the report:

Regarding the Appomattox statue:
The good news is that there is no recommendation to remove the statue.  This is due largely to the fact that Virginia State Law, in spite of Governor McAuliffe's veto of a clarification bill, STILL protects ALL veterans' monuments and memorials.  The bad news is that there is a recommendation to add "context" to the monument.  We are ADAMANTLY OPPOSED to adding any context.  The meaning of the monument is CLEAR as told by the inscriptions:


"They died in the consciousness of duty faithfully performed."

"Erected to the memory of Confederate dead of Alexandria, Va. by their Surviving Comrades, May 24th 1889" 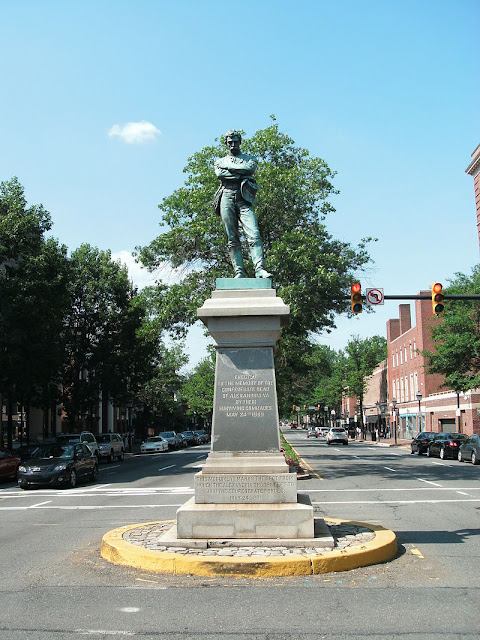 NO ADDED CONTEXT IS NEEDED and we need to make this perfectly clear.  Anyone who thinks that this will appease the monument haters is WRONG.  Even though public opinion through the entire process was overwhelmingly against ANY changes, several members of the commission task force were disappointed in the final recommendations:

"The task force was divided in its decision; the two African Americans who served on the group said the advice should have gone further in clamping down on Confederate symbols."

Jefferson Davis Highway:
The committee recommended to change the name, but thankfully, this cannot be done without the approval of the General Assembly.


CALL TO ACTION!
Contact members of Alexandria City Council and ask them to deny the ad hoc committee's recommendations to add context to the Appomattox Statue and/or change the name of Jefferson Davis highway within the city.
To reach the Mayor and Members of City Council, call 703.746.4500, or  send a group e-mail to the Mayor and Members of City Council .
You can also reach the council members using the individual links at the bottom of this page:  https://www.alexandriava.gov/Council
Make plans to attend the public hearing on September 17th.  During the ad hoc meetings, the speakers were OVERWHELMINGLY in support of leaving the monuments and memorials as is.  We need to make sure we have another strong presence and showing on Saturday.
The public hearing will be held on THIS Saturday, September 17, in the Council Chamber in Alexandria City Hall, 301 King St.  It will begin at 9:30 a.m. with public comments regarding items not on the docket, and City Council will then discuss and take public comments on docket items, including the Advisory Group’s report.  Once the docket order is finalized several days before the meeting, it will be available at www.alexandriava.gov/Dockets.  A form to sign up to speak at the hearing will be linked from the top of the docket.
If you are an Alexandria resident, let your councilman know that you will be watching to see how they vote, help spread the word, and rally the troops to the defense of our Confederate veterans!

In the meantime, we will be sending City Council our own communication, warning them that they may want to keep in mind how quickly the landscape changed in Danville when City Council there voted to remove one tiny 3x5 Third National Flag.

"They died in the consciousness of duty faithfully performed."

Will our grandchildren be able to say the same about us?

This saddens me greatly that they did indeed vote to change the name of the highway, and also proposed the statue be moved. The city of Alexandria is under the hands of misguided "social justice warriors" who simply wish to throw their weight around with little regard to history or integrity.