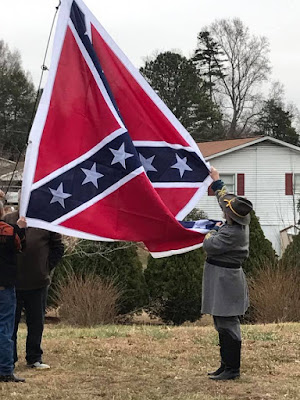 The Virginia Flaggers are pleased to announce the dedication yesterday of our 24th Roadside Battle Flag in Virginia, and the 15th raised in Danville since Danville City Council voted to strip the 3x5 Third National from the Confederate Monument on the grounds of the Last Capitol of the Confederacy. 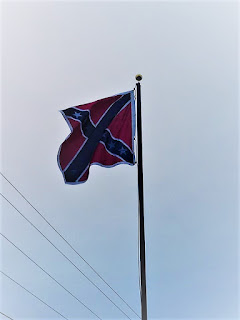 In a private ceremony, an 8' x 8' Army of Northern Virginia Battle Flag was raised on a 40' pole on Mount Cross Road, and dedicated in memory of our dear friend, Mrs. Nancy Pritchett, a Danville native who passed away three months ago. Mrs. Nancy was a true Southern lady and a fierce defender of the honor of her ancestors and the flags under which they fought and died. In July, she dressed in full dress and brought her oxygen to attend the Cabell Flag dedication, despite failing health and temperatures over 100 degrees. 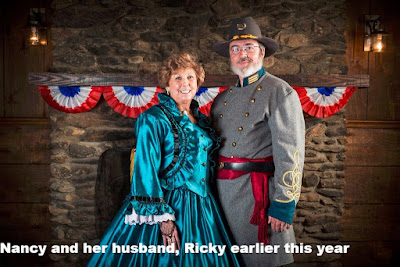 Winter weather did not prevent Nancy's friends and family from gathering for the dedication and those in attendance reported many honks of approval from passing traffic. Once the flag was raised, neighbors came by to shake the hands of the crew from Sky High Poles, and voice their approval for Danville's newest roadside flag. 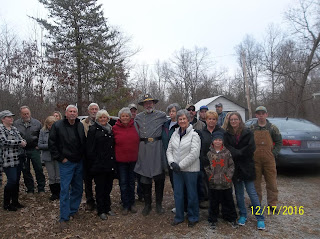 This flag was dedicated to the Glory of God, in loving remembrance of Mrs. Nancy Pritchett, and in memory and honor of our Confederate heroes.

"The world shall yet decide in truth's clear far-off light
That the soldiers who wore the gray, and died with Lee, were in the right."

I drove up from Chesapeake to attend the Lane-Armistead Camp #1772 flag raising. It was a very windy day, which made it a great day to see Dixie's colors unfurling in the wind. After the ceremony, many of us headed over to one of the compatriots' establishment, Cobbs Creek Diner, and enjoyed some great food. All in all it was a great day!