A full report of the weekend's activities will follow shortly, but we have had many requests for details on what transpired Saturday afternoon at Washington & Lee University so we decided to get this update out first, ahead of the general report.

Many of you may recall that last year, security guards at Washington & Lee University refused to allow our folks to walk up Letcher Avenue after the parade through town when we attempted to pay our respects to General Jackson at VMI.
Details here:  http://vaflaggers.blogspot.com/2015/01/va-flaggers-lee-jackson-weekend-report.html

It seems that W&L officials are determined to make sure that the demands of the six agitators are met, and are going to great lengths to ensure that W&L students will not be exposed to a battle flag as it is carried up the public sidewalk on Letcher Avenue, which apparently would cause great distress and damage to their delicate psyches.

After the incident last year, we began an investigation and received information that Letcher Avenue is, in fact, a public road, NOT privately owned by the University.  We received information from VDOT in April of 2015, that confirmed that Letcher Avenue is in no way subject to the dominion or control of Washington & Lee University.  In addition, a City of Lexington Police Dispatcher confirmed that the restriction by W&L's security force to prevent public use of Letcher Avenue is illegal.  She advised that if they should attempt to prevent any of us from walking on EITHER sidewalk along Letcher Avenue that we immediately call the Lexington Police.

With this in mind, knowing they had denied the SCV access to the LEE Chapel for their annual Robert E Lee Memorial service, and having received word that W&L had security personnel positioned at Letcher Avenue on Lee-Jackson Day, we called the Lexington Police ahead of our arrival, and asked them to meet us at W&L to make sure we were allowed access.

At 2:00, several dozen Flaggers had gathered, and W&L security would not allow access to the sidewalk to anyone carrying a Confederate flag. 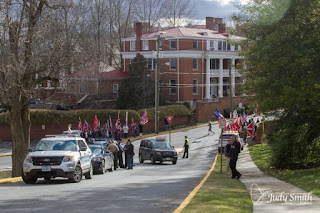 Representative from Lexington's Police Department and Sheriffs office arrived shortly after we called them. Acting as spokesman for the Flaggers, I first spoke to a female Sergent.  I told her that we had talked to Lexington dispatch, consulted with attorneys, and received information from VDOT, ALL of which confirmed that Letcher Ave. is a public street and not under the domain of W&L, and I handed her the email correspondence to prove it. She was understanding, assured me she would get some answers, and placed a call to the Chief of Police. I was asked to speak to him. I informed him of the same thing that I had just told the Sargent about the legalities of the situation at hand.

At that time a Dean at W&L called the Sheriff and he asked me if he could call me back after he tried to resolve the issue with her. I agreed and walked over to the group of Flaggers, which was growing larger by the minute, to update them on the situation.

I was quickly summoned back up the hill by the Sergent to talk to the chief of police again. He said that W&L remained insistent that law enforcement intervene if we try to walk up Letcher Ave. He asked if our folks would consider walking down the sidewalk of N Jefferson instead, and offered to instruct his officers to escort us up the steep VMI entrance and then offered to help us get this straight for next year.

I told him today was not the day that any of our folks were ready to compromise.
He then informed me that he was instructing his officers NOT to impede  the Flaggers if they walk up Letcher Avenue to VMI, but warned that W&L officials could try to obtain names and information of those who did so and go down to the courthouse and swear out a trespassing warrant on those individuals.

I thanked him and told him that we would contact him soon to "put this situation to rest once and for all". By this time, our numbers had grown, as word spread across Lexington of what was happening at W&L.  As I met with our group again, to let them know the situation and decide what our next move would be, one woman took it in her own hands to do what needed to be done, grabbed her flag, and started up the hill, marching right past the security detail. 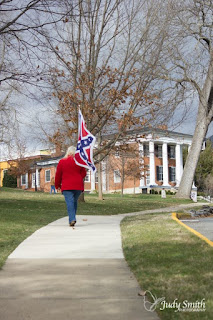 Defiantly, bravely, and determined to honor General Jackson, she proceeded up the hill without interference. One by one, others joined her, and soon a steady stream was walking up the hill, much to the consternation of the W&L security personnel. 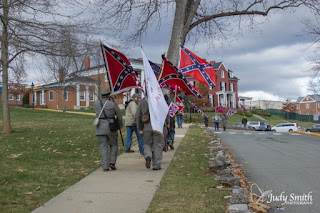 Simultaneously, a group of Flaggers who had been positioned on Jefferson Ave, took the right flank, and were escorted by Lexington police down Jefferson Ave.  The officer then stopped traffic to allow them to cross the street and enter by way of the VMI entrance.

We believe General Jackson would be proud of our flanking maneuvers!

W&L security personnel were visibly angry, and frustrated that we had outmaneuvered and outflanked them.  Flaggers who walked up the hill called it one of the most satisfying moments of the weekend as they walked right past those who less than an hour before had denied them access.

Once on the parade grounds, we were free to pay our respects to the General, and has become our custom, we unfurled a 10x15 flag that were going to raise on the Jackson Farm Flag site later that afternoon, and posed for a photo. 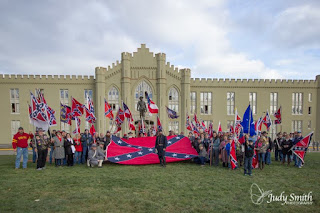 There were absolutely no attempts by anyone at VMI to impede our commemoration.  In fact, communications with VMI officials were cordial and professional.  As we turned to sing "Dixie's Land", Cadets were seen opening windows and shouting down approval at the sight of General Jackson on the grounds of VMI once again. 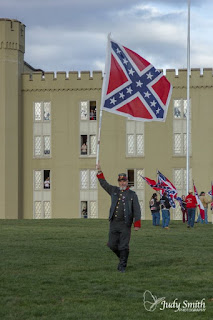 Spirits soared among those who gathered at the end of the triumphant march, led by one woman, who, if you ask her why she did it, will answer. "I  just got GOOD AND MAD at what those people are doing...and wasn't going to take it anymore!".

General Jackson, in his 1861 VMI uniform, posed for photos on the parade grounds with participants, and our own Judy Smith captured this stunning  shot as we were leaving. 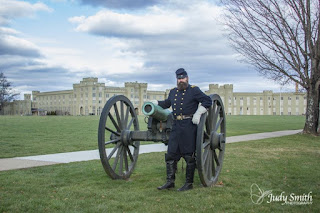 We would like to take this moment to reiterate that, as has been our experience in Lexington each time we visit, law enforcement personnel from both the Lexington Police and Sheriff's Departments treated us with the utmost respect and courtesy, not only in this situation, but throughout our entire stay. We have nothing but praise for their professionalism and sincere efforts to provide for our protection and safety.
Officials at Washington and LEE University tried to stop us from walking past their campus on our way to pay our respects to General Jackson.