The Virginia Flaggers arrived in Lexington, VA early Friday morning, and kicked off the Lee-Jackson Day State Holiday with an informational meeting  at Stonewall Jackson Cemetery. 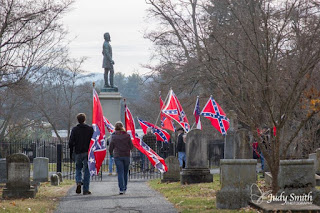 We then headed down Main Street and spread out along Main and down to Washington & Lee University, covering most of the heart of downtown.  With very few exceptions, the local residents welcomed us and often stopped to thank us for being there and forwarding the colors.  We had many, many good conversations with folks who were eager to ask questions, and receptive to the information we shared about the discriminatory flag ban by Lexington City Council...and the desecration of the LEE Chapel by Washington & Lee University. 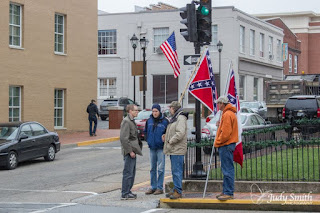 One of our favorite stories of the morning was that of a Washington & Lee University student who came out to speak to us.  He told us that he had been visiting the university last year during Lee-Jackson weekend last year and was impressed by the showing of flags. He said he had been waiting for the holiday to arrive and hoping we would be back out this year so he could come speak with us.  He carried a Mississippi state flag in his pocket and was well educated about our history and heritage. We spoke with a few reporters, and a nice piece aired that evening, inviting folks to attend the festivities on Saturday...
http://wsls.com/2016/01/15/lexington-community-celebrates-lee-jackson-day/

After lunch outside of city limits, we headed out to the I-81 R.E. Lee Memorial Flag site to raise a new flag.  We were watching the weather closely, as rain was forecasted to move in, and were able to get the flag up and flying just in time. 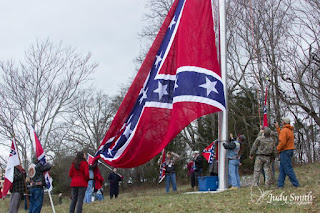 Re-dedicated, on Lee-Jackson Day 2016, to the Glory of God, and in memory of General Robert E. Lee and the men who served under him.

Heavy rain set in shortly thereafter, and we moved inside to prepare and plan for the next days' activities.

Saturday morning, we awoke to chilly temperatures, but bright sunshine filled the sky as hundreds gathered at Stonewall Jackson Cemetery for a service to honor Gen. Thomas Jonathan "Stonewall" Jackson.  The crowd was larger than we had seen in several years.  Members of the Stonewall Brigade reported they quickly ran out of the 300 programs they had printed. 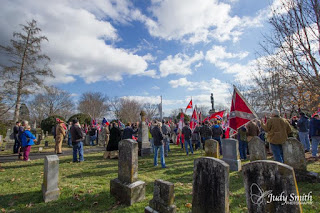 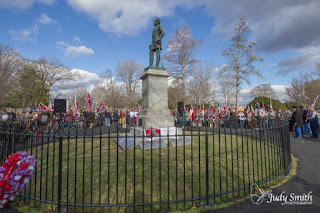 It was a beautiful service, and a moving tribute to General Jackson.Immediately following the service, we stepped off for a parade through town.  Once again, the reception was cordial, with those in attendance cheering us on, and shouts of thanks and support were heard throughout the route. 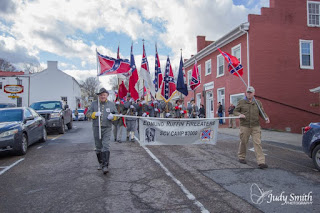 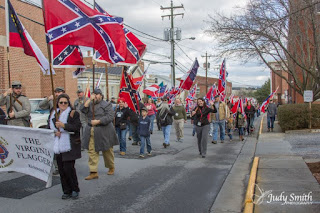 Following the parade, Flaggers attended a Memorial Service for Robert E. Lee at a Lexington church, or headed back down Main Street for more flagging.

Kudos to the men of the Stonewall Brigade for organizing this event every year and for their commitment to ensuring that there is still a formal commemoration of Lee-Jackson each year in Lexington.

After the parade, we headed across town to W&L.  The details of "The Battle of Letcher Ave" were sent in a previous email, and can be found here:  http://vaflaggers.blogspot.com/2016/01/va-flaggers-lee-jackson-day-2016.html

After leaving VMI, we headed over to the Jackson Farm Memorial Battle Flag site on Rt. 60.  The flag that was raised one year ago on Lee-Jackson day, 2015, had been repaired several times, and needed to be replaced.  We raised a new 10' x 15' flag and rededicated her in memory and honor of General TJ "Stonewall" Jackson. *Thanks to our friends at Tredegar DroneWorks for this great aerial photo!

After raising the new flag, we headed back into town to finish out the day with some very chilly, but very productive flagging! 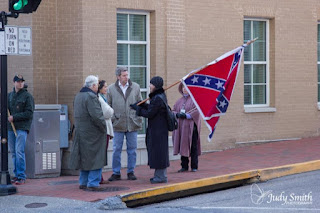 One of MANY great conversations we had during the Lee-Jackson weekend.

As the day came to a close, the last Flaggers left standing were reluctant to leave after what was, by far, our best Lexington Lee-Jackson weekend to date. 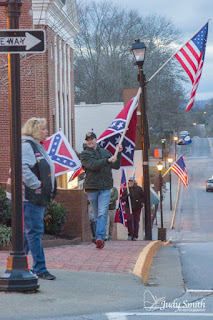 Many thanks to all who joined us, many for the first time, those whose support made it all possible, and those who offered prayers of protection and safety.  Over the two days, we did not encounter a single protester or heckler, and enjoyed a warm welcome from most residents and students.  We were able to freely and properly honor and remember Generals Lee and Jackson, and forward the colors on the sidewalks where City Council had hoped their ban would mean the end of their display during the holiday.  We were encouraged by the fact that in spite of all of the best efforts of some to drive her down, Dixie is alive and well and burning in the hearts of even the youngest citizens of the Commonwealth... 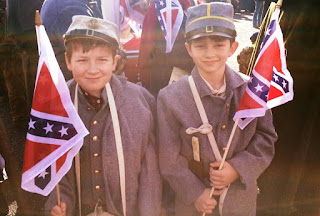 will leave you with these drone video highlights of some of the events in Lexington...

I had the good fortune to spend a couple of days in Lexington a few years ago and loved that town. If I ever have to move to VA that will be my choice of a place to live. I visited Jackson's final home, and walked around his garden, and ate dinner that night at a great family/communal-style restaurant.

I had the good fortune to spend a couple of days in Lexington a few years ago and loved that town. If I ever have to move to VA that will be my choice of a place to live. I visited Jackson's final home, and walked around his garden, and ate dinner that night at a great family/communal-style restaurant.