We received permission to share this excellent piece, written by a gentleman who joined us on the front lines for the first time last Friday in Lexington for Lee-Jackson Day...

Recently I participated with a new Civil Rights group in reaffirming our First Amendment right of free speech and peaceful assembly on a public street.

Washington & Lee University is attempting to deny this by force, complete with security guards in a blatant violation of civil rights. VDOT and the police affirmed that Letcher Ave is indeed public right of way and W&L had no right to stop peaceful people from carrying the Battle Flag on public property.

Arriving, I was briefed on what citizenship etiquette was expected. We were not to impede pedestrian or vehicular traffic, to respect private property, not to use loud, profane or threatening language, and not to litter. BLM and Occupy take note. The briefing closed with prayer for safety and tolerance.

With Battle Flag in hand and wearing my veteran€™s baseball cap I took my post where I was pleasantly surprised at the warm reception. 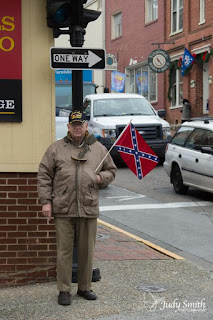 About half the cars exhibited no notice but the other half waved, gave a thumbs up or spoke encouragingly. Pedestrians and visiting tourists also commented favorably including one distinguished looking lady who made eye contact, winked and whispered €œKeep up the good work!€ as she passed by. The drivers of several trucks bearing W & L logo gave an apologetic smile and waved approval.

The one and only negative reaction was a woman in a BMW sports car who must be suffering from Affluenza and White Privilege Guilt Syndrome. Stopping at the traffic signal she rendered a double single digit salute using both hands. At first I thought perhaps she was advertising the availability of her services but when she lowered her window and released a string of invectives and vulgarities I realized that it was she and not my Battle Flag that was engaging in hate speech.

I resisted the temptation to respond because in the adjoining lane a mother with her children in the car also lowered her window. This kind lady, setting an example for her children, first thanked me for my service to our country and then gave thumbs up to the Battle Flag.

Later we raised a huge Battle Flag on private property overlooking I- 81. As the flag was unfurled and far off motorists realized what was happening, the sound of supportive car and truck horns blaring was like a symphony. 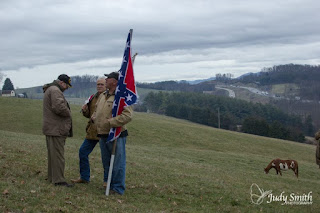 During lunch I learned how the left wing Gestapo is attempting to intimidate people by posting lies on the internet; calling employers and urging firings simply for exercising free speech.

So what is the source of this hatred of the Battle Flag? Well it is like the US Flag, the Christian Cross, the Star of David and the Crescent Moon of Islam, all of which once have been hijacked by haters. A 1931 KKK rally at Hotel Roanoke, pictured in Roanoke Times featured three U.S. Flags, four Christian Crosses but no Battle Flags.

Unauthorized temporary usage by a hate group does not allow anyone else to redefine for all others the previous and future meaning of a symbol.

Wornie Reed and others at the Christiansburg conference, not delivering a history lesson but  a  propaganda lecture, have no more credibility to define forever the Battle Flag€™s meaning for others than does Donald Trump have the right to define Islam.

The absurdity of the Nazi correlation to the Confederate soldier and his flag is a classic example of racial dividers trying to impose their superficial understanding of history on those who know the truth.
The flag was in 1861, and is still now worldwide, a symbol of resistance to what many consider tyrannical governments.

In a memorial setting the Battle Flag honors soldiers who fought for many reasons, the least of which was for the perpetuation or the abolition of slavery. Listen to the soldiers, North and South by reading their letters.

This is the great hoax than induces many such as Bill Bestpitch to betray their ancestors honor for a handful of votes without really understanding what their ancestors believed.

Elitists in academia, government, media and entertainment regard those who defend the Battle Flag as untermensch. These men and women are not going to furl their Battle Flag and quietly go to the back of the bus. Reintroducing an abandoned tactic of nonviolence and demanding civil rights protection, they will persevere.

So what is the take away from all this? In spite of what the Gauleiters of speech censorship tell you, there are many Americans who still support the Battle Flag. 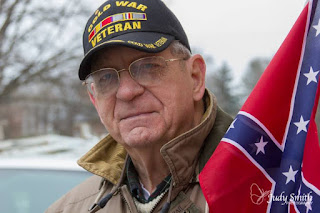 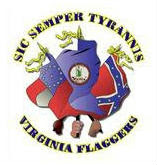 Good man, common sense is a rare thing these days.