"In this place, I will give thee peace...Thus saith the Lord of Hosts. This Chapel is dedicated to the memory of the Confederate dead."   Inscription above the pulpit, Confederate Memorial Chapel, Richmond, VA. 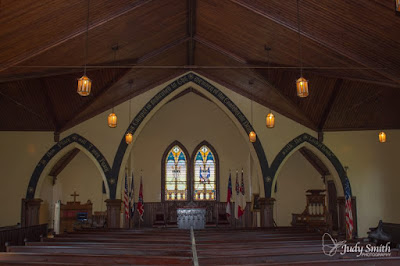 Years (and hundreds of broken promises) later, the VMFA, with a wink and a nod from the Governor's office, has stolen the land that was designated for a memorial park to build a parking deck, ripped the flags off of the Confederate Memorial Chapel, kicked the Sons of Confederate Veterans out of the Chapel so that they could offer their own interpretation of OUR history, and actively worked to silence those who dared to speak out against their disgraceful actions.

If there was any question as to how the VMFA and the Commonwealth were going to interpret our history moving forward, the answer has come swiftly, and painfully:

Confederate Chapel to Get Trippy Makeover During InLight

NEXT weekend, November 13th and 14th, artists will probe the socio-political significance of the CONFEDERATE MEMORIAL CHAPEL, by turning the memorial into a trippy funhouse.. Yes, you read that correctly, ¦a TRIPPY FUNHOUSE.

In case you think we are exaggerating, or making this up...please read for yourself here:  http://www.styleweekly.com/Studi/archives/2015/11/01/confederate-chapel-to-get-trippy-makeover-during-inlight

The sacred Chapel, where Veterans who had answered the Commonwealth's call to defend her and were left PENNILESS and ALONE in their old age, sat each week to worship, and gathered to say final farewells to their compatriots as one by one the men passed from this life onto the next, until the last Veteran died in 1949 ... is going to be turned into a FUNHOUSE of lights and sound at the hands of the VMFA, and under the leadership of the Governor'soffice.

As far as we are concerned, allowing this kind of desecration of this consecrated memorial is intentional and no different than if VMFA officials or the Governor of Virginia walked out to Hollywood Cemetery and urinated on the graves of our Confederate dead.

We can't help but ask: are you mad enough YET?

The Virginia Flaggers plan on attending/protesting the Trippy Dippy Light Show.  We will have a candlelight vigil/flagging at the Chapel, with photos of the Veterans who lived and died on the grounds of the Old Soldiers' home.  We hope hundreds will join us, Friday, November 13th, 7:00 p.m. -  Midnight, and Saturday, November 14th, 7:00 p.m. - 10:00 p.m.  Come when you can, stay for as long as you can, and be a part of those taking a stand against what we feel is a direct and intentional slap in the face of the thousands of us whose ancestors served the Confederacy.

In the meantime, we will continue our twice weekly flagging of the VMFA, THIS SATURDAY, November 5th, 1:00 p.m. - 4:00 p.m.  Join us on the Boulevard as we protest the removal of the Confederate Battle Flags, forward the colors in memory and honor of the Confederate Veterans who lived and died on the grounds of the Old Soldiers' Home, and change hearts and minds in the Capital of the Confederacy.