After making our way to VMI, we assembled on the parade grounds, at Jackson's statue.  Almost immediately, Cadets came out to speak with us, and to pose for photos with Generals Jackson and Lee.  As three young men were standing with us, a man came out of the archway, very agitated and screaming the Cadets' names.  He approached and demanded they get away from "those people" and "that thing".  We can only assume that by "those people" he meant the re-enactors portraying Lee and Jackson, and the men and women gathered to honor them on the holiday, and by "that thing" he meant the Confederate Battle Flag. 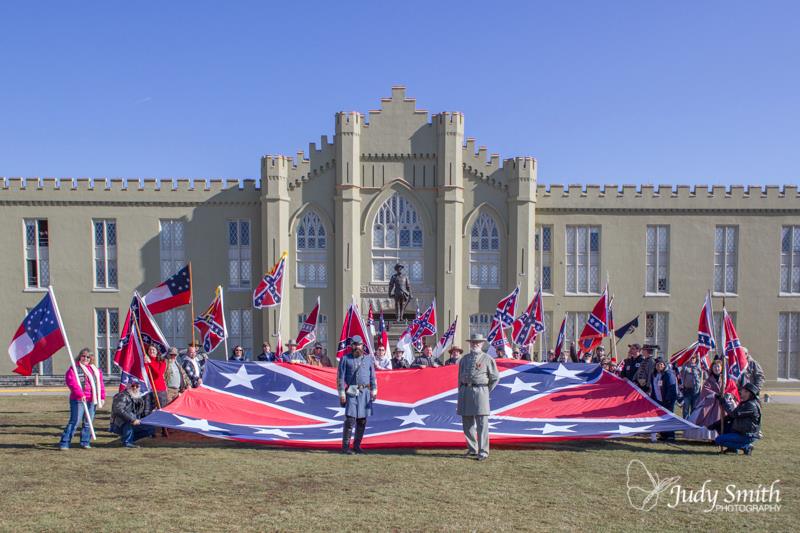 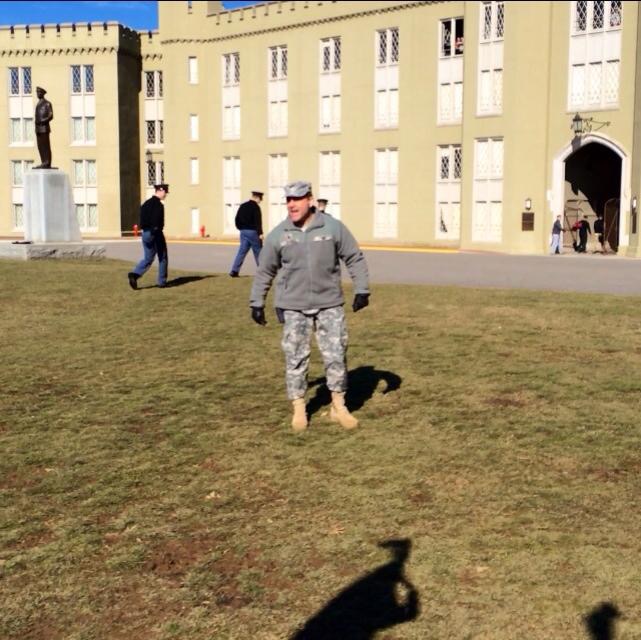 For the remainder of the half hour or so we visited the grounds, a Cadet was posted at the arch to prevent any cadets from communicating with us.

One of our Flaggers placed two battle flags at Little Sorrell's marker.  A VMI employee came out and told him that he would need to remove them when he left. 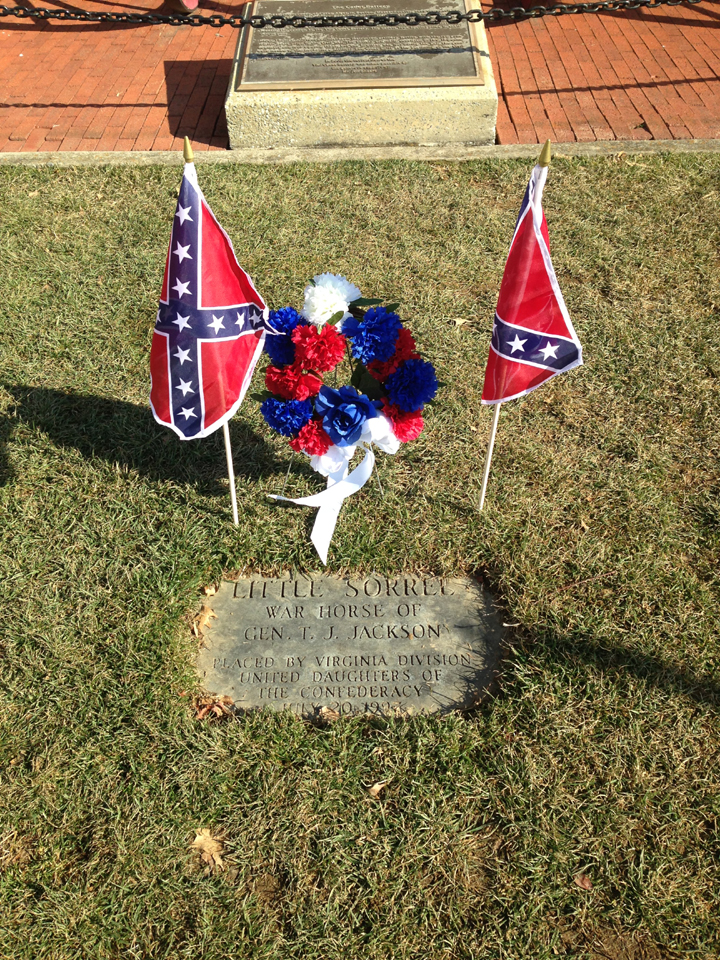 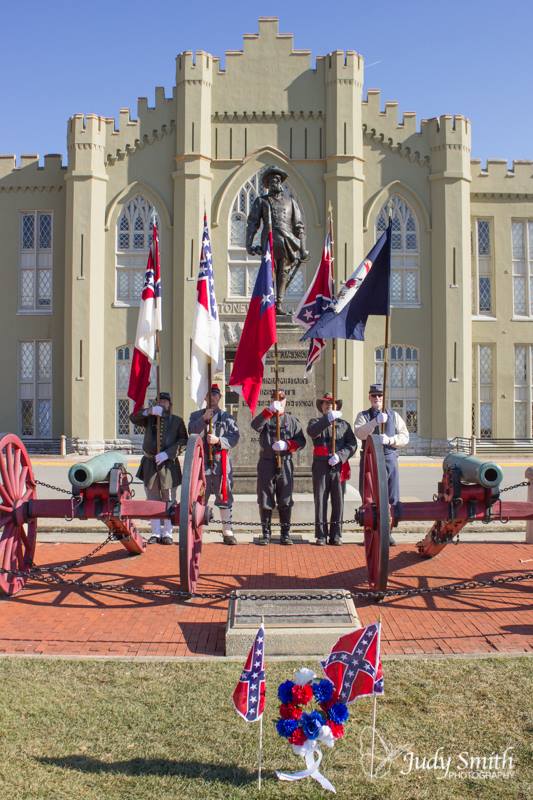 After paying our respects and singing a rousing version of Dixie for the Cadets who had gathered at open windows, we began to make our way back to downtown Lexington, to continue flagging.  At this point, I noticed that one of our young Flaggers was still at Jackson's statue.  I was informed that he had told others that he was very angry about the treatment of the cadets earlier and the fact that he could not leave the stick flags at Little Sorrell's marker, so he had decided to post the colors at that spot for the rest of the day.  I walked over to speak with him, and knew by the set of his jaw as I approached that he was determined to make his stand.

It just so happens that this young man is the GGG nephew of VMI Cadet/Confederate Veteran Moses Ezekiel.  My only concern at this point was to try and make sure he got a bite to eat, so when Va Flagger Bo Traywick (VMI Class of '69) volunteered to stand in his place while he went to get some lunch, he agreed to leave his post long enough to do so. 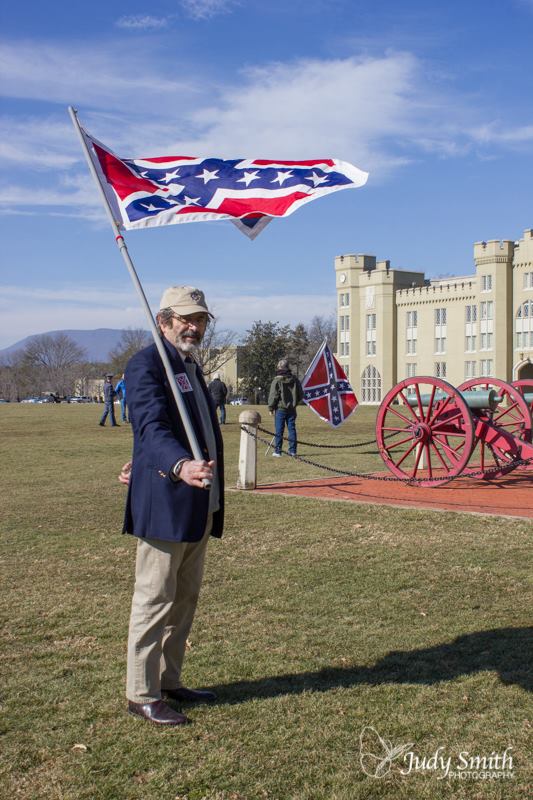 When he returned, he brought his 6x9 battle flag and remained at his post, in front of Jackson's stature for the remainder of the day.  He reported to us that by this time the Cadet guard was relieved of his post, and that once again, Cadets began to approach him, ask why he was there, and show their support, and pose for photos.  This continued throughout the afternoon. 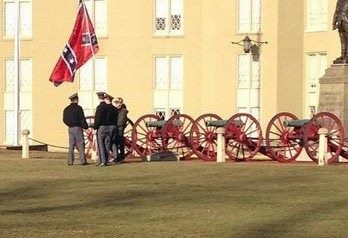 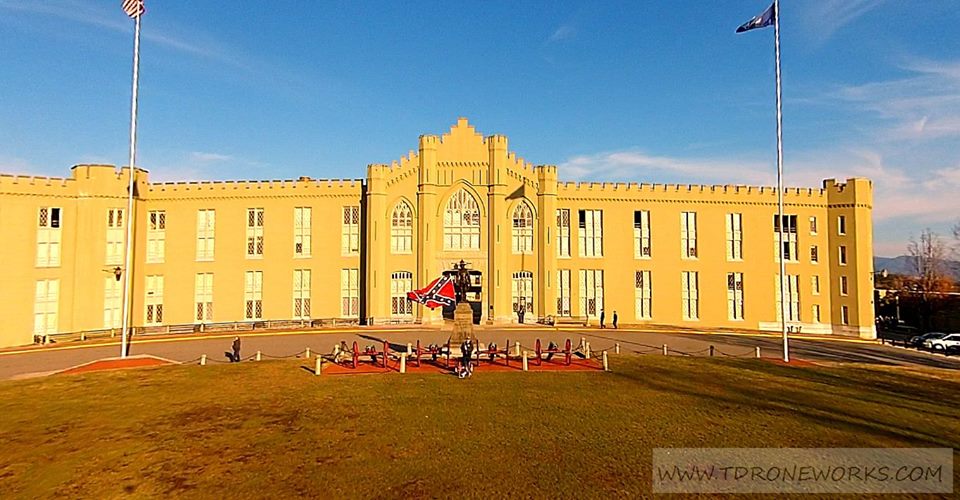 Near dusk, an older man who said he was a VMI employee came out and told him that he would have to leave, since formation was scheduled to occur soon and that he would "offend" black cadets.  After a brief, somewhat heated discussion, where the young man explained to the man who he was, why he was there, and described the numerous black Cadets that had just spoken with him and posed for photos, the young man removed the stick flags and left the campus.

As he left, he was stopped by a black man visiting campus, who made it a point to shake his hand and let him know that he understood completely about the flag he was carrying and the honor due Lee and Jackson and was sick and tired of people speaking "for him" in that regard.  After that encounter, and as he was leaving campus, he was approached by a gentleman who said he had overheard the "discussion" with the VMI employee before he left the grounds and had gone to the Stonewall Jackson House and purchased a gift for him, presented him with the gift, and let him know how much he appreciated the stand he had taken that day. 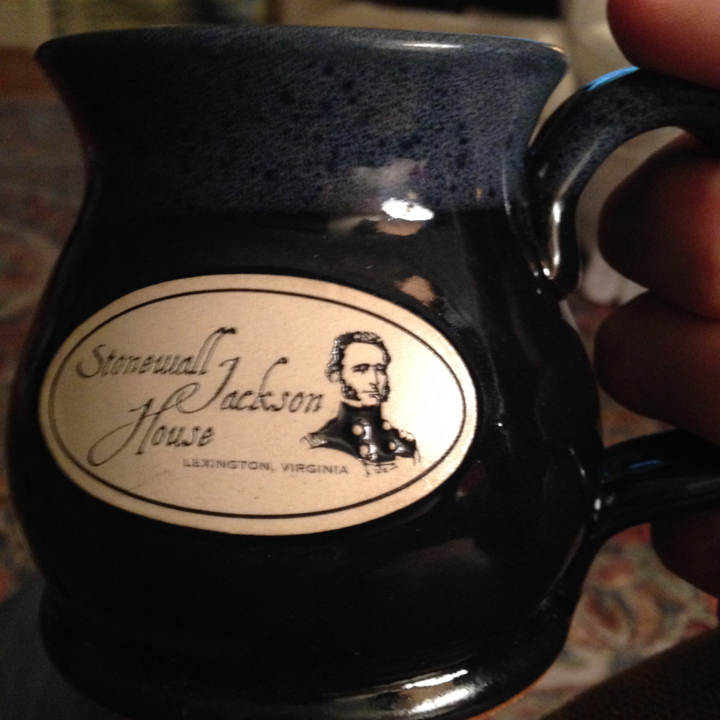 I have heard that our detractors commented on the "graying" of our ranks, when photos of the huge crowds gathered in Lexington began to surface.  That observation may be a fair one, but when I consider the stand that one 15 year old boy took, acting without prompting and with a pure heart, it occurred to me that once again, it was the youngest among us who led the way, and set the example for us all.

For those back in town, Flaggers reported another successful afternoon of Flagging, with overwhelmingly positive responses and MANY instances of folks stopping to shake our hands and thank us for being there. 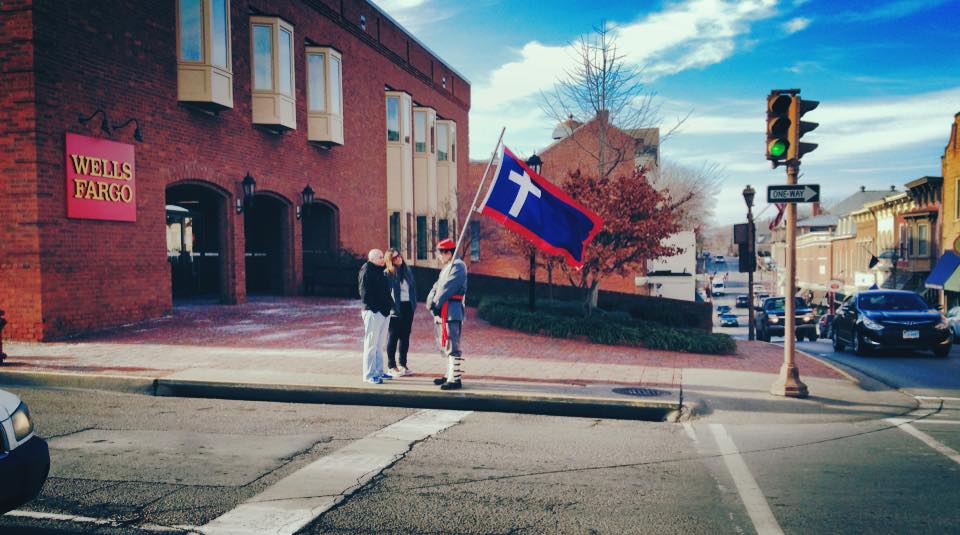 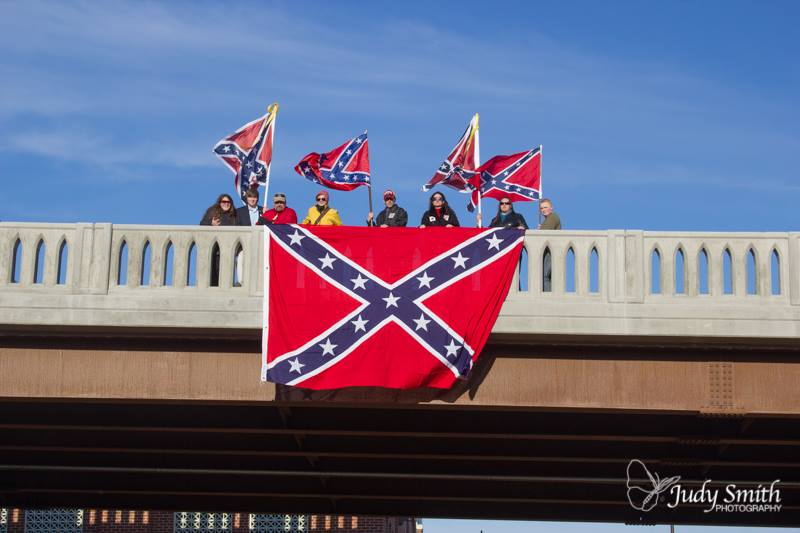 In the afternoon, these young men joined us at the corner of Nelson and Main Street. At first, we thought they were part of a pledge for a college fraternity, but after talking with them, they told us they were high school kids just looking to join in the fun we were having. They said they had no opinion one way or the other regarding the Confederate flag and were just out there for satire. The signs were GREAT! We gave them some tips on improving sign visibility and proper flagging techniques. We even tried to teach them "God Save the Queen". They said they looked it up online before they came, but couldn't quite get the tune. I guess they don't teach "My Country Tis of Thee" in school any more. ;) 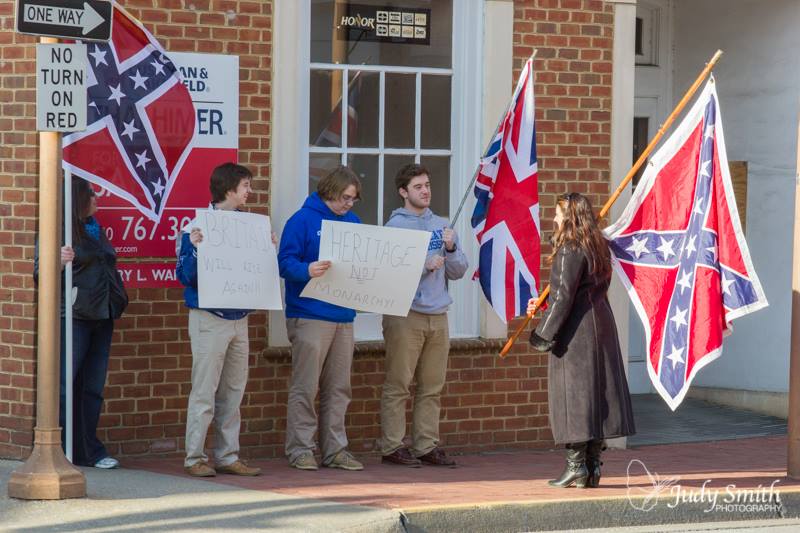 They were great kids -- polite, respectful, and clever -- and we enjoyed having them there.

As the sun set in Lexington, the last Flaggers standing were exhausted, but left with hearts filled with emotion from the two days spent honoring Lee & Jackson, protesting those who refuse to do so, and changing hearts and minds in Lexington. 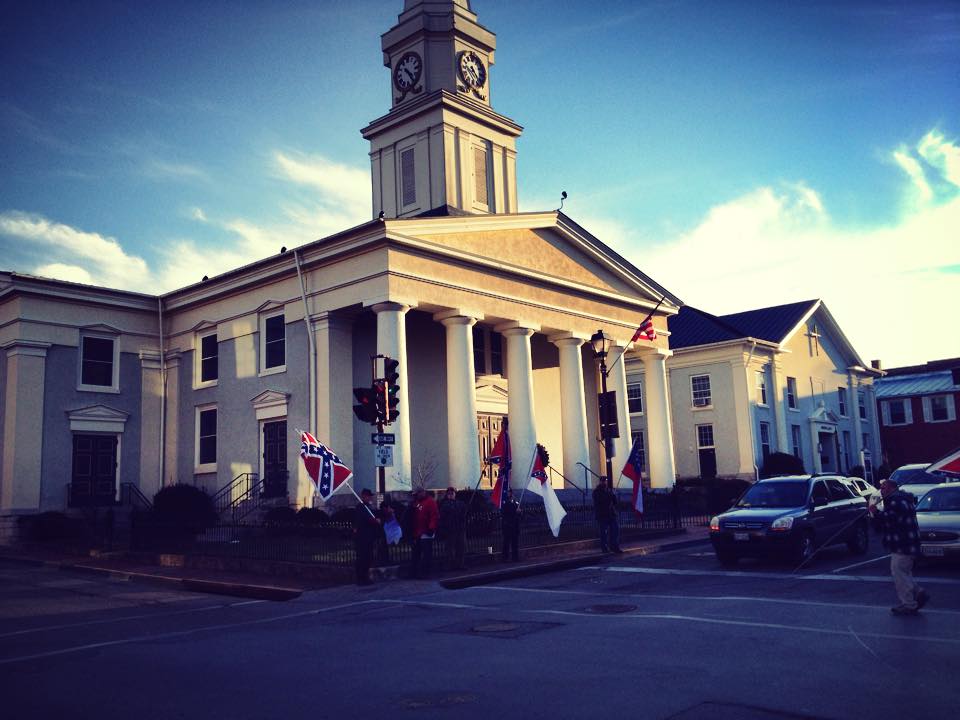 Please take a moment to watch this truly breathtaking video, courtesy of our friends at Tredegar DroneWorks, with some incredibly moving photos and video taken in Lexington, including a glimpse of the new Jackson Farm Memorial Battle Flag on Highway 60 in Lexington:

and finally, a message received from a VMI Cadet, sent Saturday afternoon:

"Great showing by the Flaggers at the Institute today! It does my heart good, lookin' out of barracks and hearing Dixie. Keep up the good fight!"

As always, thank you all for your continued prayers and support!

Wow! Very impressive site and I'm confident will be an asset to the Flaggers.

Did anyone find out the name of the Yankee culprit?