Saturday morning, we gathered at Stonewall Jackson cemetery for a memorial service for General Jackson. Once again, God smiled on the Confederates gathered to honor Lee & Jackson with beautiful weatherâ€¦sunny, breezy, and temperatures near 50 degrees!  A large crowd was on hand for the service, and those in attendance paid respects to the General through prayer, singing hymns, and laying memorial wreaths. 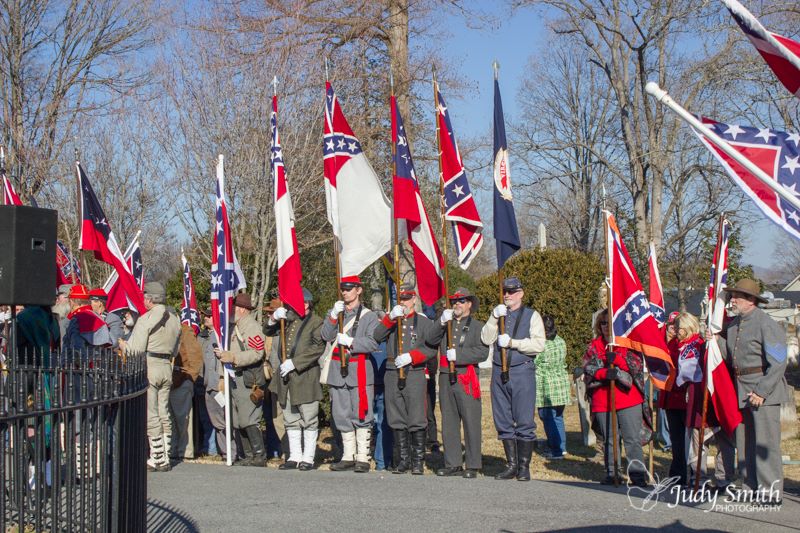 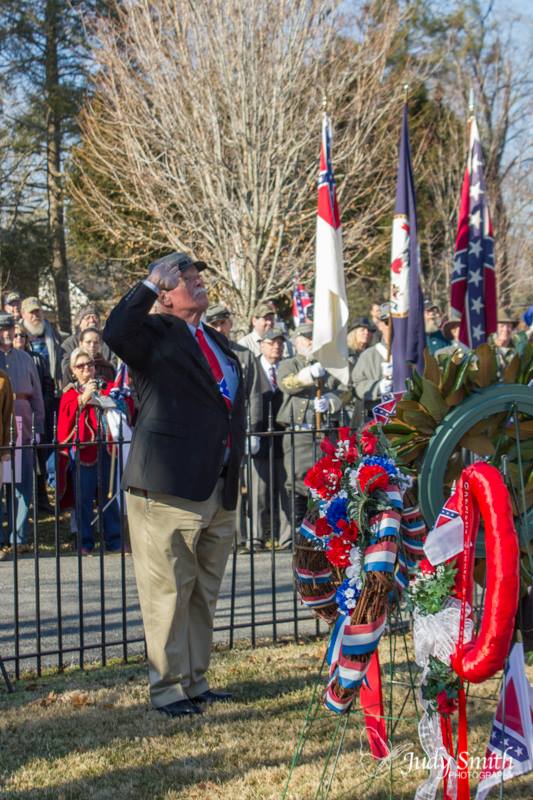 Immediately following the service, we formed up for a parade through Lexington.  Our unit was led by Generals Lee and Jackson, a Flagger color guard, and followed by the largest group of flaggers we have ever had attend the event including SCV, UDC, OCR and Mechanized Cavalry members from across the Commonwealth and the country!  It seemed to us that there were about twice as many folks gathered to watch the parade as there had been last year as well.  It was truly a glorious site, to see the parade stretched down main street, and the street filled with flags and supporters of Confederate heritage. Along the route, we sang Dixie, handed out stick flags, and received the support and well wishes of all who had gathered. 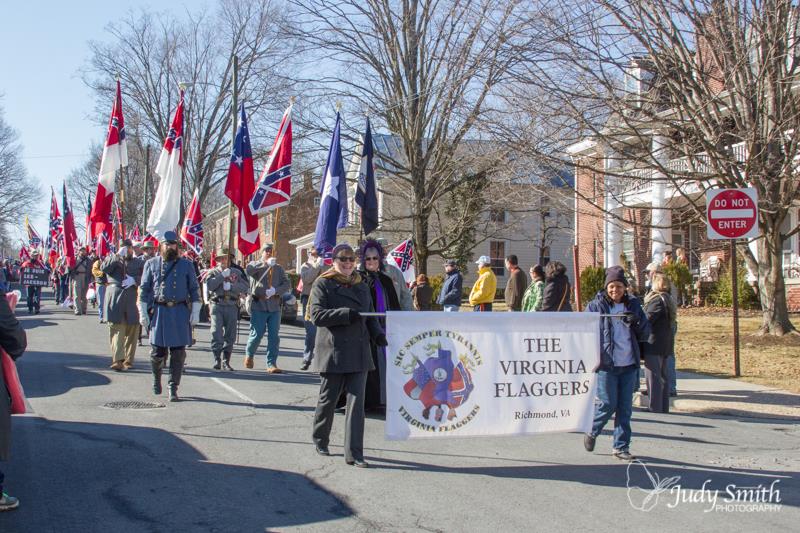 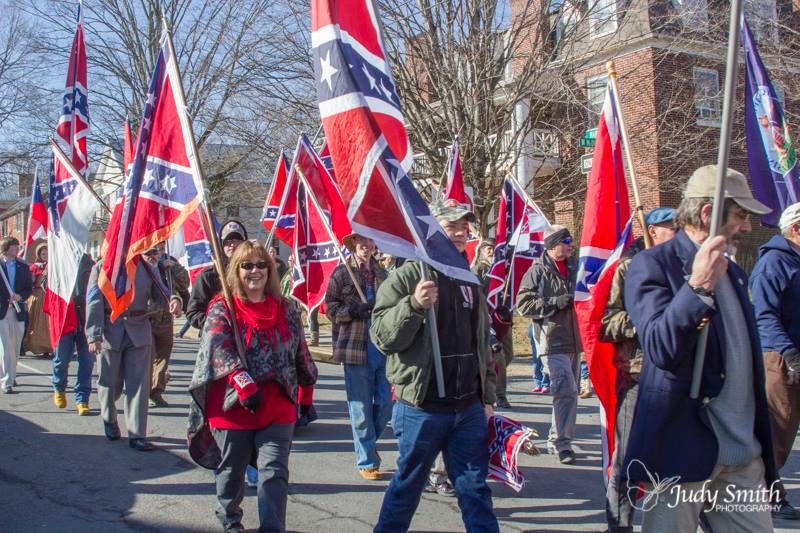 At the end of the route, the parade took a detour from its normal path.  Instead of heading to Washington and Lee University, we were directed the opposite way, and into the municipal parking deck.  At this point, we turned and our entire unit headed over to Letcher Ave., to make our way to VMI to pay our respects to General Jackson before the Memorial Service, as has been our custom for the past several years.

As most of you know, a group of 6 students who attend Washington and LEE university's school of law wrote a letter in April of 2014 to Washington & LEE officials (copy attached) which demanded that the university €œhold itself responsible for the racist and dishonorable conduct of Robert E. Lee.€  Specifically, these agitators demanded the following mandates be implemented, threatening €œcivil disobedience€ if the administration failed to comply tot their demands:

1)  We demand that the University fully recognize Martin Luther King, Jr. Day on the undergraduate campus.

2)  We demand the University stop allowing €œNeo-Confederates€ (i.e.SCV, UDC, re-enactors) to march on campus with confederate flags on Lee-Jackson Day and to stop allowing these groups to hold programs in Lee Chapel.

3)  We demand that the University remove all confederate flags from its property, including those flags located within LEE Chapel.

In July, W&L President Ruscio began the systematic capitulation to these demands when he stripped the replica memorial Army of Northern Virginia Battle Flags from the chamber which holds the "Recumbent Lee" statue in the LEE Chapel.  Shortly thereafter, Confederate Flags were prohibited on the grounds, and those wishing to visit the Chapel were not allowed to carry a Confederate flag and were made to remove apparel that had a Confederate flag on it.  Recently, W&L officials announced that classes would be canceled next school year in celebration of Martin Luther King, Jr. Day, and this year, the LEE Chapel was not available to the SCV and UDC for their annual Lee-Jackson Day memorial service, reportedly (and conveniently) due to renovations.

Throughout the weekend, we had Flaggers stationed at Washington & Lee, and Campus Security was right there to make sure none of "those flags" were allowed on the property.  One of our flaggers, speaking of his conversation with one of the security officers, remarked,  "I told him it was a sad day in America when the borders of W&L are more secure than those of the United States." 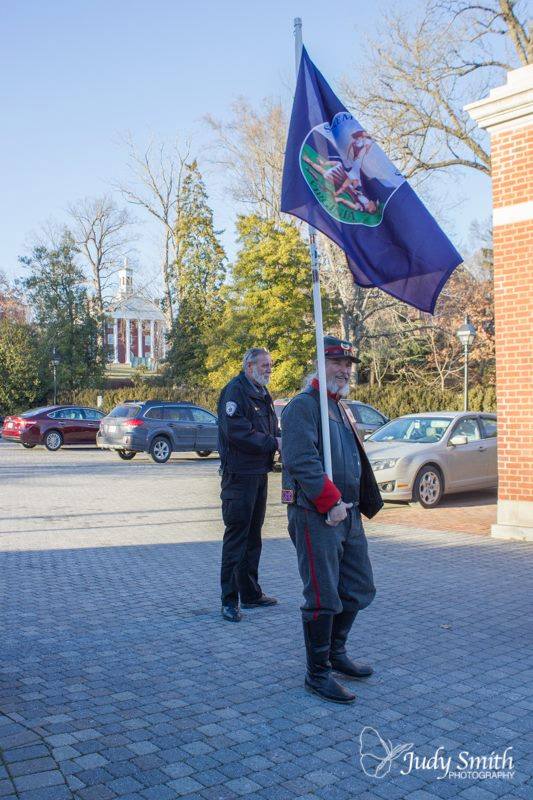 As our group walked up Letcher Avenue after the parade, we stopped for a photo, unveiling the 20' x 30' flag that will soon be raised on I-81 in Lexington. 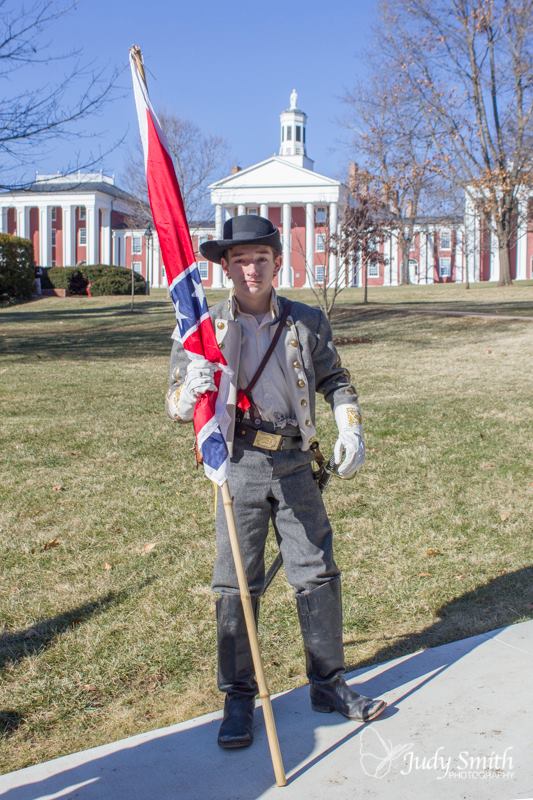 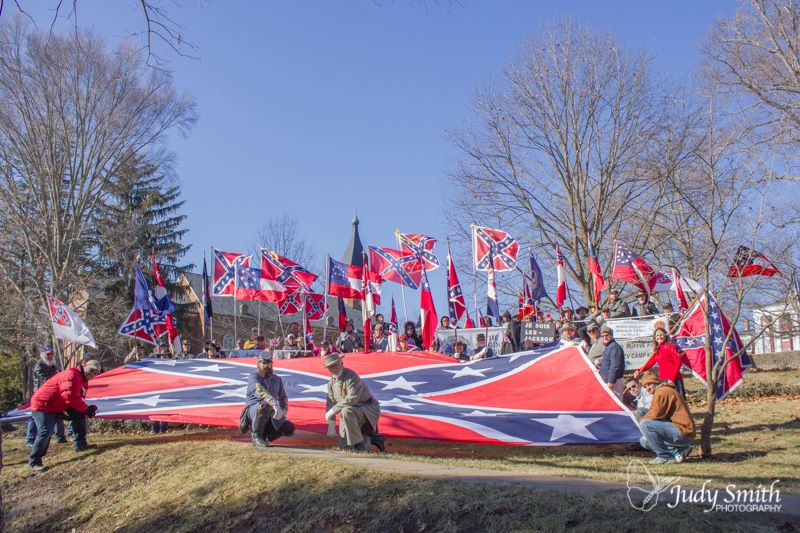 Security guards rush to ensure an education did not break out at Washington & Lee University.

At this point, those who still wanted to make the trip to VMI, including our own Robert E. Lee, portrayed by an elderly Vietnam Vet, were forced to walk back down Letcher Ave, cross busy traffic twice, and climb a very steep, difficult to navigate entrance, in order to access the VMI parade grounds. 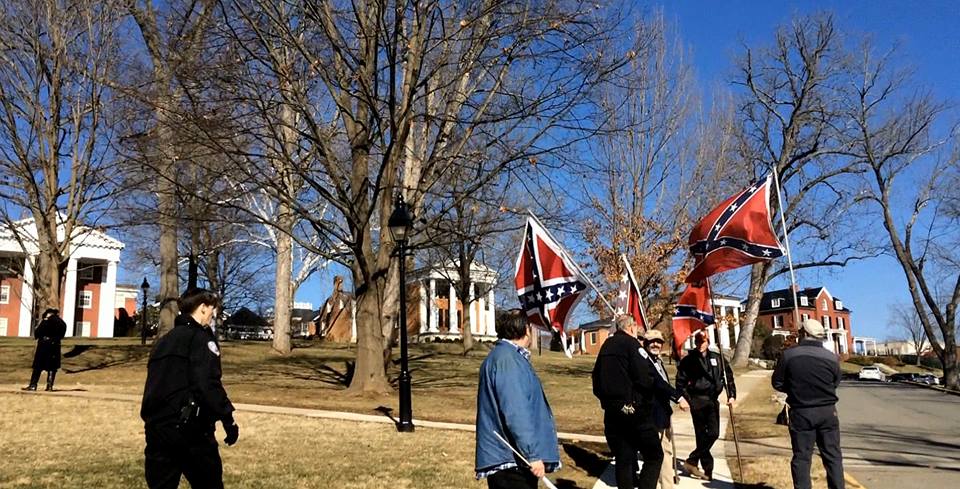 For those who were not keeping track, this means that officials at Washington & Lee have already capitulated to THREE of the FOUR ludicrous demands made by the agitators, in effect giving full credence and agreement to their assertion as to the €œracist and dishonorable conduct of Robert E. Lee.

SHAME ON WASHINGTON & LEE UNIVERSITY FOR FORSAKING THE HONOR, MEMORY AND LEGACY OF ROBERT E LEE...AND SHAME ON THOSE WHO CONTINUE TO SUPPORT THE ADMINISTRATION AND THEIR COWARDLY ATTEMPTS TO APPEASE.

"Obstacles may retard, but they cannot long prevent the progress of a movement sanctified by its justice, and sustained by a virtuous people."-President Jefferson Davis

Despite the obstacles presented, we made it to VMI to pay our respects, although the hassle, delays, difficult hike, and lost time meant that many did not make it back in time for the Noon service at Lexington Presbyterian.

Our next and final report  will share our experience at VMI and the final hours of flagging Lexington that afternoon. 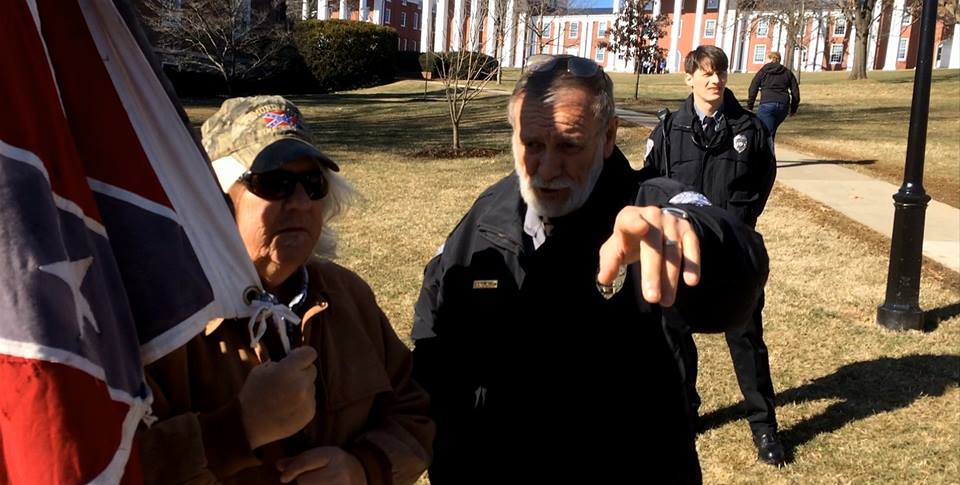 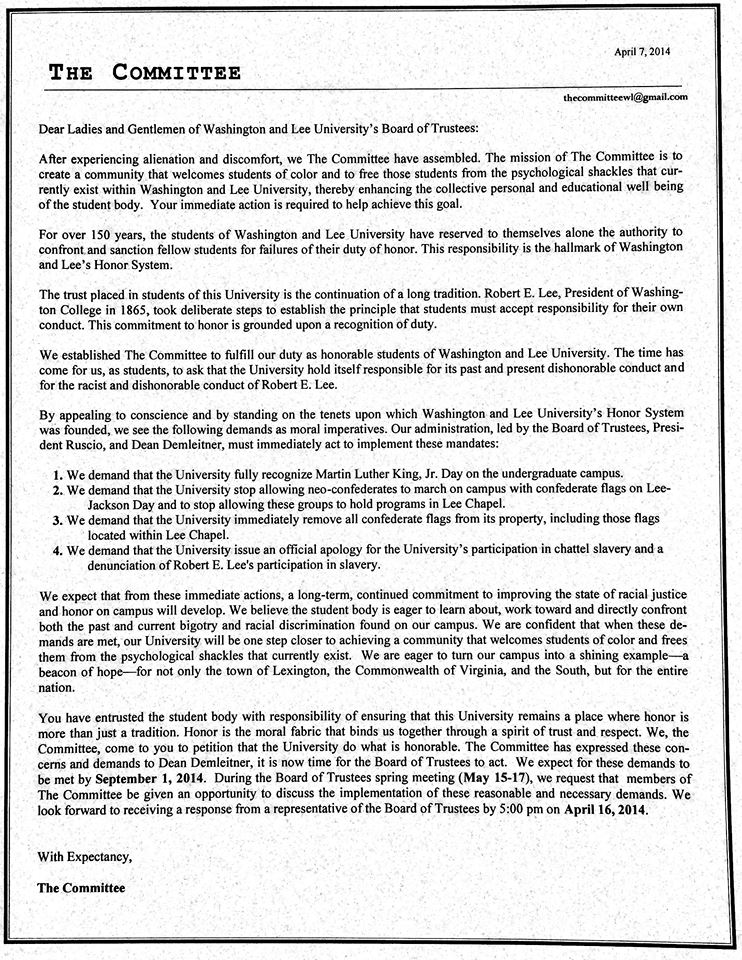 The 20' CBF photo on the knoll surrounded by the Va Flaggers
is AWESOME! Thanks to Judy Smith Photography for such a beautiful and emotionally moving experience depicting our Confederate Heritage. Many of us that were unable to attend were able to live the event vicariously through the photos and comments. Thanks so much to all involved! Deo Vindice!