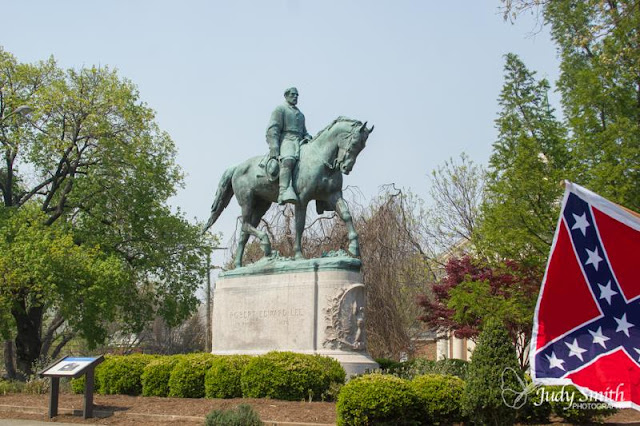 Honorable Members of the Commission:

Professor John Mason, Vice Chair of your "Blue Ribbon Commission on Race, Memorials and Public Spaces," has been quoted as saying that "Robert E. Lee, as everyone knows (?!), commanded the Confederate Armies in a war that the essential purpose of which was to preserve slavery and white supremacy."


This is "the propaganda of the victorious" in a nutshell, touted by "Court Historians" for a hundred and fifty years, and condensed for our politicized, sloganeering, short-attention-span, emoting, low-information-voters in our sound-bite, TV-commercial attuned era.

The truth of the matter - if anyone is interested enough to look into it objectively - is that Robert E. Lee commanded the Confederate Armies defending the South in a war waged against her by the North, whose essential purpose was invasion, conquest, and coerced political allegiance.

*Photo courtesy Judy Smith Photography
Posted by The Va Flaggers at 9:39 AM

This man is so full of mis-directed HATE, it is scary to watch him spew his lies and hate.

That devout racist Professor Mason is not only math and science challenged, he needs to learn a whole lot of America-Indian history.

Math and science now set the bar for truth and accuracy in ALL conjectures proposed by historians, as well as the conjectures of experts in other fields of study. And there is NO scientifically credible evidence to support his MYTH that the South was trying to preserve the North’s definition of “slavery” and white supremacy.

Everybody has seen modern examples where experts from other fields of study use scientific methods to CORRECT historian goof ups. For example there’s the generations old historian goof that in the original Jamestown, Virginia tragedy there was no cannibalism. Archeologists and forensic experts proved the historians were wrong and so rewrote the history books on the subject.

Historians are notoriously inaccurate in their conjectures and Mason is a racist, myopic, moronic parrot... an America-Indian hating, tunnel vision bird brain repeating a old myth.

The Original Confederates, the Iroquois didn’t kill all their enemies. They adopted the enemy children and young men into the Five Nations, educating them as their own family. Heritage was matrilineal, not paternal, in that Original Confederate society mothers replaced their lost loved ones by adoption of the enemy. You belonged to your mother’s clan and male European blood line ancestry doesn’t apply in that system.

By 1776 Southerners had already adopted and adapted Iroquois spirit and traditions to the so called slavery problem. That’s why the Constitution counted the “slaves” as fully human and 3/5 of the way to full citizenship. It’s also why Southerners called their African “slaves” ‘our servants’ or ‘our people’ as well as Aunt and Uncle. They weren’t “slaves” in the original European sense of the word, they were adopted family members, with the same last name, learning a new way of life.

But the North was and still is too racist to understand the Southern adaptation of Iroquois Confederacy traditions of adoption, assimilation and familial heritage and lineage.

As for that racist Professor... consider suing him for slander and libel in a class action lawsuit. He'll have to try to prove his ridiculous conjecture in front of a jury. When he loses he'll have to pay court costs as well as compensate for pain and suffering.

Then he'll be in the history books.