On Thursday, July 25th, 5 Flaggers would gather on the Boulevard in what would turn out to be a VERY eventful afternoon/evening. The weather was gorgeous in the Capital of the Confederacy, and Scalawags and Carpetbaggers got an eyeful of Confederate flags and an earful of facts and information. 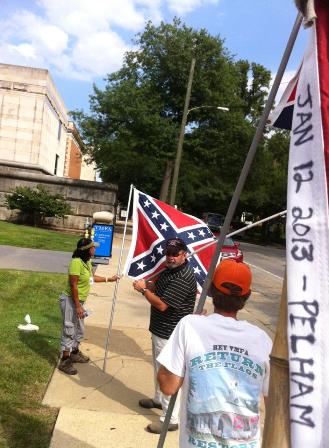 Our Flaggers were cursed at and taunted…not by the usual suspects…but by a Scalawag member of one of our own Heritage Organizations! Next we had the rare opportunity to flag Alex Nyerges, the Director of the VMFA and the man ultimately responsible for removing the Battle Flags from the Confederate Memorial Chapel, up close and IN PERSON. We called out to Nyerges, who at first responded pleasantly, and then beat a hasty retreat when asked “why won’t you just put the flags back on the Chapel!?!?!” Finally, we had the opportunity to send a message to Museum officials via one of the museum guards, who engaged our Flaggers in a discussion about the violations and illegal acts that have occurred.

Along the way, we were able to talk to folks about the VMFA and their discriminatory acts, and in defense of our honorable Confederate ancestors… forwarding the colors…and CHANGING HEARTS AND MINDS! The gentleman pictured below stopped to ask what we were up to. When he heard our story, he asked to take a photo with us. 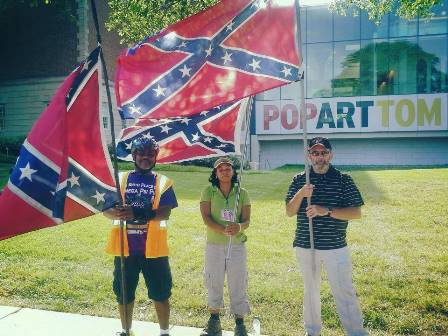 RETURN THE FLAGS! RESTORE THE HONOR!

JOIN US Saturday, July 27th, on the Boulevard as we forward the colors and take a stand for our ancestors and the flags under which they fought and died.

If you cannot be physically present, please take a moment out of your day to call or write the Director of the Virginia Museum of Fine Arts (VMFA) and let him know how you feel about the forced removal of Confederate Battle Flags from the Confederate War Memorial Chapel. Contact Alex Nyerges: alex.nyerges@vmfa or by phone (804) 340-1504 or FAX (804) 340-1502

Since October 1, 2011, the Va Flaggers have been steadfast in our purpose, which is to RESTORE THE CONFEDERATE BATTLE FLAGS to the Confederate Memorial Chapel on the grounds of the Old Soldiers Home in Richmond Va, which were forcibly removed by officials of the Virginia Museum of Fine Arts, a State Agency.

We are resolved and will stand firm in this fight, in the same manner as our honorable ancestors.
We WILL NOT be moved.
We WILL NOT retreat.
We WILL NOT be pressured to change our methods, demands, or mission to suit the wishes of others who refuse to join the fight.

The flags WILL fly on the Chapel again, and the honor and valor of the Confederate Soldier WILL NOT be forgotten in Richmond, VA.

"I hold concession or compromise to be fatal. If we concede an inch, concession would follow compromise, until our ranks would be so broken that effectual resistance would be impossible...." - John C. Calhoun
Follow us:


Check out our Confederate and Family Friendly Search Engine...  www.confederatearchives.com

Sunday, September 29th :  SAVE THE DATE,  Va Flaggers 2nd Anniversary Celebration/Picnic
April 19, 2014:  Susan will be traveling to Quincy, FL to speak at the Confederate Memorial Day Service at the Soldier's Cemetery, sponsored by the Finley's Brigade, SCV.
Posted by Connie at 8:18 PM

Just want you guys know I support you on showing your flags. We need a new flag now to represent a second American revolution.