As we mentioned earlier, there is very little to report...

In court today, the Judge did not rule on the tarps, or the monument removal question. The City of Charlottesville argued that the tarps should stay up until August 12th, still claiming they are "mourning shrouds". Attorneys for the plaintiffs argued that the tarps violate state law and were put up without regard for the protection of the monuments. The judge has set a date of February 27th for his ruling on the tarps.

There is no date set for the monument removal case. There was discussion of setting a date for as early as October, 2018...and as late as February, 2019.

On a very positive note, the injunction is still in place and City Council cannot move either monument, by order of the judge.

In the meantime, we thought y'all would enjoy this photo taken this morning, before the city re-tarped the monuments after the tarps were removed again last night, for the third time in 24 hours. We reported yesterday that the City of Charlottesville pulled men off of duties relating to public safety and inclement weather on Sunday to have them re-tarp the Lee and Jackson monuments after they were cut loose overnight. During the course of the day, they were cut loose and re-covered a total of three times.

Check out these photos of the damage done to the park by the equipment brought in to put the illegal tarps back up during the inclement weather.

It is apparent that Wes Bellamy and his friends on City Council have no problem wasting taxpayer money and putting the public safety at risk, all to satisfy their hate-filled agenda to rid Charlottesville of every trace of its Confederate history and heritage. 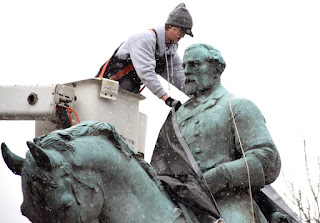 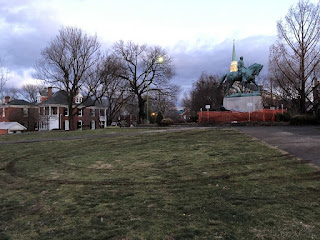 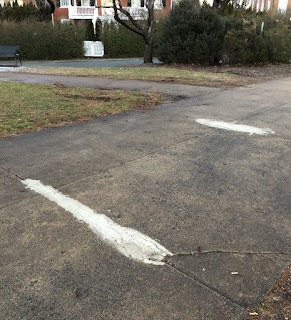