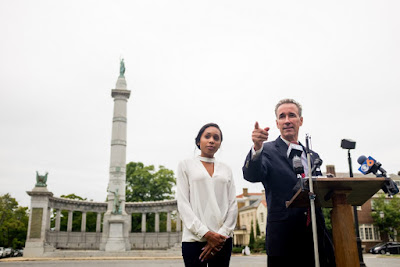 In the midst of all the election excitement last night, two small, but very important races were decided in Virginia, and in both cases, voters rejected candidates who were outspoken in their desire to remove Confederate monuments.

VICTORY IN RICHMOND! Mayoral candidate and former front runner LOSES his bid for election after calling for removal of Jefferson Davis monument.

We reported earlier that Joe Morrissey had announced at a press conference in September that he would make removing the Jefferson Davis monument his first priority when elected, only to back track a few days later.

Before election night, he would once again voice a desire to remove the monument, and was billed as the front runner going into last night's election.
We are pleased to report that Morrissey LOST his bid for election last night! 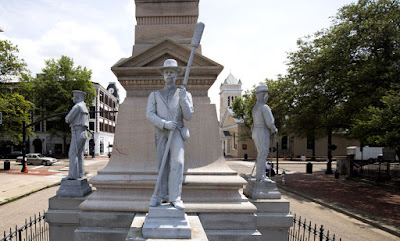 In Portsmouth, incumbent Mayor Kenny Wright had been one of the major forces driving City Council's (so far) failed attempts to remove Portsmouth's  Confederate monument.

“You got people that want it to go and I`m one of those people,” says Mayor Wright. “It truly is a symbol of hate, racism, division, slavery and all of those horrible things that happened during that period." -

These are VERY positive, VERY good developments in the Old Dominion, and more evidence of a citizenry that is sick and tired of the PC madness that has swept across our nation.  Even so, we cannot become complacent.  Now more than ever we must remain vigilant and continue to push forward in protecting our memorials, and push back even harder against those who would destroy them and dishonor our Confederate ancestors.
Posted by The Va Flaggers at 12:44 PM

Charlottesville is still trying to keep our Lee statue. The Commission's decision to keep it is under attack. Final meeting is Thursday nite, Nov 10, Walker School, 1564 Dairy Rd, 6:00 but get there earlier if possible.