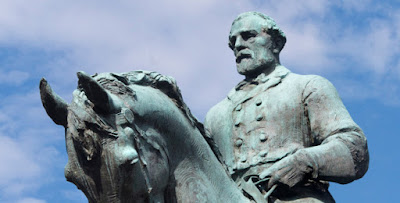 As a retired US veteran, a member of Civil War Trust, and an amateur historian, I urge your commission to maintain Charlottesville's historic statues as they are without added comment which demeans or maligns the individuals who proposed and facilitated them.
These statues were raised to remember our military veterans--notable veterans who served the state of Virginia without question--when the state summoned them according to their conscience and familial obligations. Like all military personnel and myself, these men served their homeland regardless of whether they agree or disagree with all its governmental policies.
Moreover, the individuals whom these statues represent lived in the 19th Century and should not be judged according to 21st century values and societal norms. The society in which they lived held differing values than ours and they should not be falsely judged according to our modern day standards. To do so is known as presentism and is indicative of cultural bias.
I urge the commission to avoid any appearance of "political correctness" and presentism and do that which is right and honorable--preserving these statues and monuments to our veterans for future generations.
Thank you for your time!