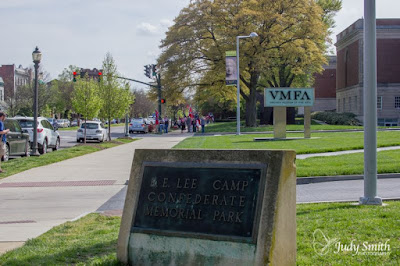 Our readers may recall that we shared the news that Richmond police officers were able to serve warrants on a local protestor after he turned up at the Virginia Museum of Fine Arts last month. We are thrilled to report that earlier today, the most violent of the “counter-protestors” who sometimes antagonizes and attempts to provoke our Flaggers on the Boulevard in Richmond was convicted of disorderly conduct in a local courtroom, in connection with a June incident where he spit at, cursed out, and intimidated several of our Flaggers in a violent rage.

He was convicted, levied with a fine and court costs, forced to publicly apologize, and instructed to keep his distance from the Va Flaggers.

We are thrilled with the precedent set and proud of the ladies who swore out warrants and took time off of work today to face their assailant in court. We left the courtroom with renewed optimism, rekindled commitment to our Cause, and more determined than ever to stand, fight, and NEVER back down!

Bo Traywick came out to the courthouse today to offer support and to be available if needed, since he has also had experience with the accused . He wrote and sent a wonderful report with commentary, a portion of which we are sharing with his permission…

I thought the judge today was first class! He was totally objective and understanding, and not the least a demagogue, as we sometimes are faced with in these latter-days of “neo-Reconstruction.”...

Mr. Romans told the judge that he had studied history at VCU. Well good for him. My family lived it. We didn’t need some Marxist, revisionist “Court Historian” to tell us what I have been told about it since I was a little boy. I heard our history from those who had heard it first hand from those who had made that history – at least from those few who had survived it! But we are soon to be passing away ourselves, leaving the truth to be interpreted and twisted in the latest political winds. But we may take heart. The truth may not be killed. It may be buried alive, but it will not die.

Pass this along, if you wish, Miss Susan. It is all for the Cause of the Truth that we all stand for.

Another good blog title would be: The Fall of Romans. LOL!