On Tuesday, December 3rd, the Virginia Flaggers gathered at Hollywood Cemetery for an afternoon of cleanup.

On the eve of the I-95 Chester Memorial Battle Flag Raising, we met one of our out of town guests at the NW corner of the Soldiers’ Section to try and locate his ancestor’s grave. He was disappointed to find that it appeared to have been located in some overgrowth of hedge and vegetation. After obtaining permission and the blessing of the folks at the cemetery, we decided to see what we could do to help clean it up. 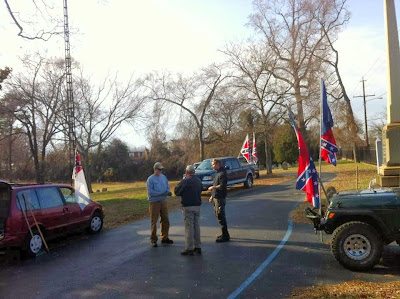 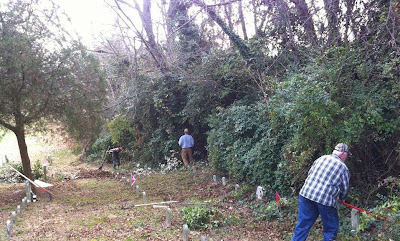 The section we were working in is the “Old Soldiers Section (west), and has special to meaning to the Va Flaggers, as it is the location of burial for many of the residents of the Old Soldiers’ Home on the Boulevard. This section was one of the first used for burials of Veterans from the home. After two years of standing for these men on the Boulevard, even those of us without a direct ancestral connection have come to feel a special connection to them.

We cut the overgrowth and pulled it to the street for pick up . We also replaced several stick flags, and had some really good conversation with cemetery visitors. By mid-afternoon we had completed phase 1 and notified the office. They were very happy with what we had accomplished. 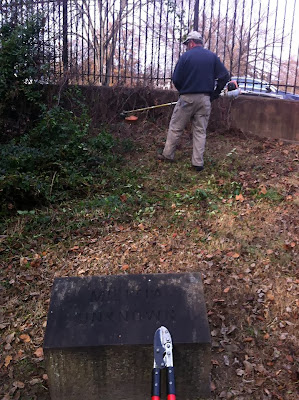 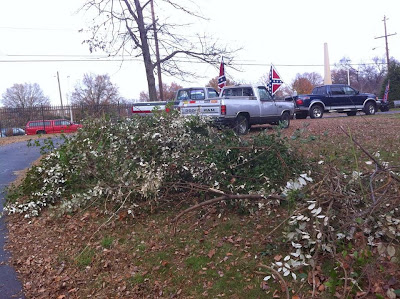 There is still more work to be done and we will plan another work day soon. Many thanks to all who came out and volunteered! Stay tuned for the next scheduled work day…

Friday, January 17th - Saturday, January 18th, 2014: Lee-Jackson State Holiday/Flagging/Memorial Events, Lexington, Va. The Va Flaggers will be flagging Lexington all day Friday, for the Lee-Jackson State Holiday, and participating in the Memorial Services and parade on Saturday, with more flagging Saturday afternoon. We invite all to join us! More details soon. Info from the Stonewall Brigade here: http://leejacksonday.webs.com/

Saturday, February 1st, 2014: Susan will travel to Statesboro, GA to speak at the Lee-Jackson Banquet, held by the Ogeechee Rifles, Camp #941, SCV. RJ's Restaurant, 454 South Main St. (US 301 S.) @ 6 pm for the meal, preliminaries @ 7 pm and the program immediately following. Seating limited to 125. Ticket information forthcoming at a later date.

April 19, 2014, 2014: Susan will be traveling to Quincy, FL to speak at the Confederate Memorial Day Service at the Soldier's Cemetery, sponsored by the Finley's Brigade, SCV. 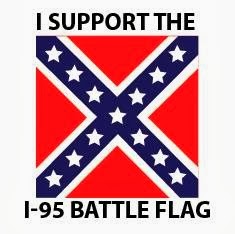 Contributions to the I-95 Memorial Battle Flag projects may be mailed to:
Va Flaggers
P.O. Box 547
Sandston VA 23150