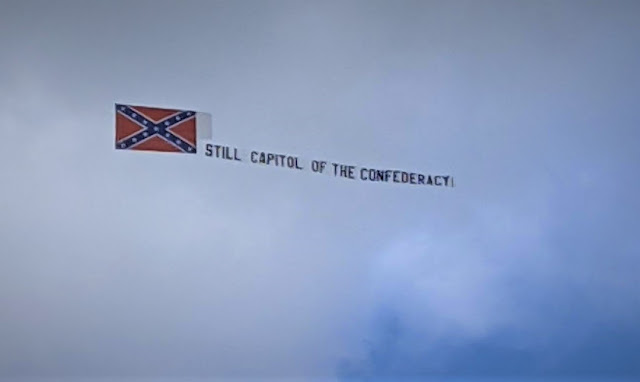 Posted by The Va Flaggers at 9:00 AM No comments:


In the meantime, know that we are exploring every legal option available, and are working on a couple of things that will, God willing, materialize in the next few days....AND...we plan to make good on our promise to raise a flag and place a monument for every one removed.

Thank you Mayor Stoney, for the inspiration for our next mega flag, the General Thomas J “Stonewall” Jackson Memorial Battle Flag. We are actively seeking property in the Richmond area for the installation. Please contact us at vaflaggers@gmail.com if you can assist.

God bless the eternal memory of Gen. Thomas Jonathan "Stonewall" Jackson, and God save the South!
Posted by The Va Flaggers at 2:44 PM 2 comments:

NASCAR gets FLAGGED! Dixie Takes Her Stand in Talladega

Earlier today, the Va Flaggers raised a 10’x15’ Memorial Battle flag on a 50’ pole on property adjacent to Route 40 in Franklin County.
At the request of the landowner, the flag was dedicated to the Glory of God, in memory and honor of all Confederate soldiers, and specifically to honor the men who fought in the 10th Va Cavalry, Co K along side his ancestor, who is buried nearby.

Due to restrictions in place in the Commonwealth, we were unable to have a ceremony, nor have any of our folks even attend the flag raising. We will have a formal dedication when it is deemed safe to to do so. Stay tuned for updates.
We would like to offer our sincere thanks to Sky High Poles for their help with this installation, each and every one of you whose generous support makes these projects possible, and the men of the Lt Gen Wade Hampton SCV Camp 273, Columbia, SC who donated the first flag that was raised at the site today.
This is the 31st roadside Memorial battle flag that the Va Flaggers have raised in the Commonwealth since September of 2013.
The attacks against the honor and virtue of our Confederate dead have reached a fevered pitch in the Commonwealth. Our Governor is poised to sign legislation, thanks to a new democratic majority in our legislature, that will allow localities to destroy war memorials. For every flag or monument moved or removed, we promise another will rise to take its place. It’s the least we can do, considering their sacrifice.

We have not yet begun to fight.

All glory to God.
All honor the the Confederate soldier.


The Virginia Flaggers are pleased to report the installation of a NEW Roadside Memorial Battle Flag in the Commonwealth!  This flag, our 30th since we raised our first one in September of 2013, was raised earlier this morning to the Glory of God, and in honor and memory of Virginia’s Confederate Veterans, on Rt. 40 in Pittsylvania County, on a busy stretch that is heavily traveled by travelers and tourists headed to Smith Mountain Lake.

We want to thank Governor Northam and Virginia Democrats for the uptick in folks contacting us about putting battle flags on their property.  It seems their disgraceful attempts to denigrate our history and heritage, dishonor our veterans, and desecrate our monuments and memorials has backfired and hopefully will be the catalyst to wake the sleeping giant of Confederate resistance in the Commonwealth and help to turn Virginia back in the right direction.

Site #31 is in progress.  Stay tuned for information on the upcoming flag raising/dedication service.

Many thanks to each and every one of you whose generous support makes all of this possible.  Without your contributions, and the dedication and hard work of an army of volunteers, construction on new sites and maintenance of existing ones would be impossible.


All glory to God.  All honor to the Confederate soldier.

To assist with our Interstate Battle Flags and ongoing Heritage Defense projects, please make checks payable to “The Virginia Flaggers” and mail to:

New J.E.B. Stuart Monument To Be Raised in Ararat, Va

This is what Richmond Mayor Stoney wants. He has been getting tips from his pal Wes Bellamy in Charlottesville on how to completely divide and destroy a community, and it looks like he is well on his way to succeeding.
Please call Richmond public works at (804) 646-7000 and tell them how disgusted you are by this vandalism and ask them when it will be removed.
There is no question as to what kind of people are behind this. “God is gay” was spray painted on the foot of the memorial to a man of exemplary faith and Christian character.

They hate our heritage because it is a Christian one. They hate us because we refuse to relinquish our birthright or deny our faith.
We are in for the fight of our lives, folks. Pray up. Gird up. Man up. Our time is now.
Posted by The Va Flaggers at 4:14 AM 6 comments: